This post has to do with fat and turkey vultures and my new diet of lard and vodka  . . . 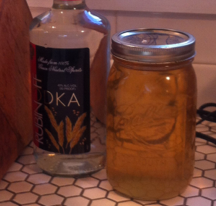 I got the best pie crust recipe from Christopher Kimball (Cooks Illustrated) which involves using vodka as 1/2 of the liquid in order to prevent the gluten from being released while you work the dough.  I happened to have several big bags of local lard from our 1/2 pig that we buy from a neighboring farmer every year.  I also happened to have many pounds/varieties of local apples, so I decided to make some pies. Really, really delicious pies with very flaky crust. I rendered the leaf lard that I had in the freezer and made the jar of lard you see above.  I had several more bags of lard, but I realized that I had made as much rendered lard as I would/should need so I decided to put the rest of the lard out back near our compost for whatever creature might want to fatten up for the coming winter.  I forgot about it for a week or so.  The day before the predicted arrival of Hurricane Sandy, we took the dogs for a woods walk.   On our way home we saw a dozen or so buzzards circling the field behind our house.  Yikes, I thought, are they standing by to see what tasty treats the hurricane might deliver?  Then I realized that the hungry crows, raccoons or coyotes I had envisioned feasting on the leftover lard, were instead a flock(?) of opportunistic buzzards.  As my husband, two little dogs and I passed, and the buzzards cast their eyes toward us, all I could think was, “look alive everybody!”
Previous Next