I have been thinking about “beat” quite a bit lately, and I wanted to share some of my (swirling and contradictory) thoughts and recent experiences. My natural reaction (as a skeptic and contrarian) to the hand-weaving community’s obsession with “squaring one’s beat” has been, “if that’s your bag, go for it.” I couldn’t really find a burning desire to change my own approach, which up until now has been: find a good sett, get a natural beat for the fabric and eyeball it from there. This approach has taken me far because it works a lot of the time, makes weaving fun, and allows me to wander the fields of my mind while I weave, without having to come back to earth, tape measure in hand. And even if “not caring” isn’t really a good approach to teach, I believe it is important for new weavers to cultivate the joy and freedom of the craft before being too burdened with “the rules.”

So, it turns out I am not a “new” weaver any longer (29 plus years at  the loom – I would write WTF if my kids wouldn’t find it so cringe-worthy). And I still believe that joy and freedom trump the rules, particularly in an arena that is overwhelmingly populated by people looking for a satisfying creative outlet rather than a profession.

However, “satisfying” has new meaning for someone who has been at it for so long, and perfecting one’s craft is part of that satisfaction. I have three recent experiences with “beat” that prompted this post. The first is a pattern I have been working on for the Plain Weave Etsy site for linen placemats. The pattern is one I created for a Vävstuga class a few years ago. It interested my “pattern partner” Véronique Perrot. She wanted to re-invent the pattern as napkins, but I (for all my freedom chatter) liked the “old.” I had designed it specifically for placemats and wanted to do placemats. Consequently, we decided to do a duet – she on napkins, me on placemats. We used different weights of Euroflax Linen, and had a ball coming up with our own treadling variations and colorways. 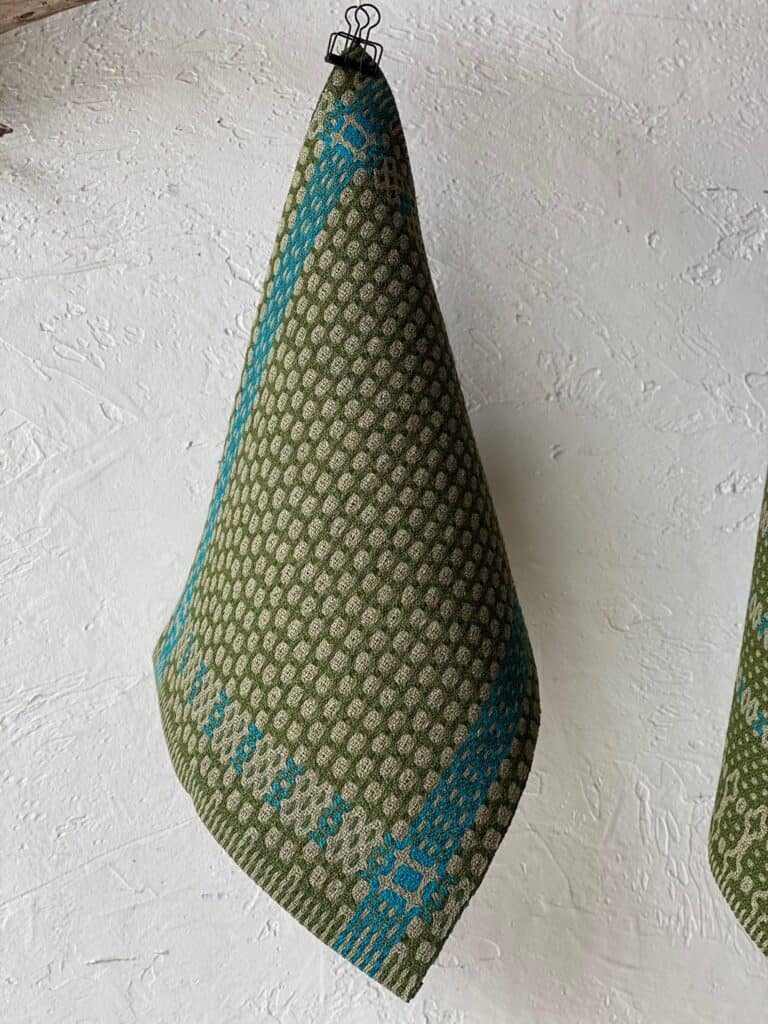 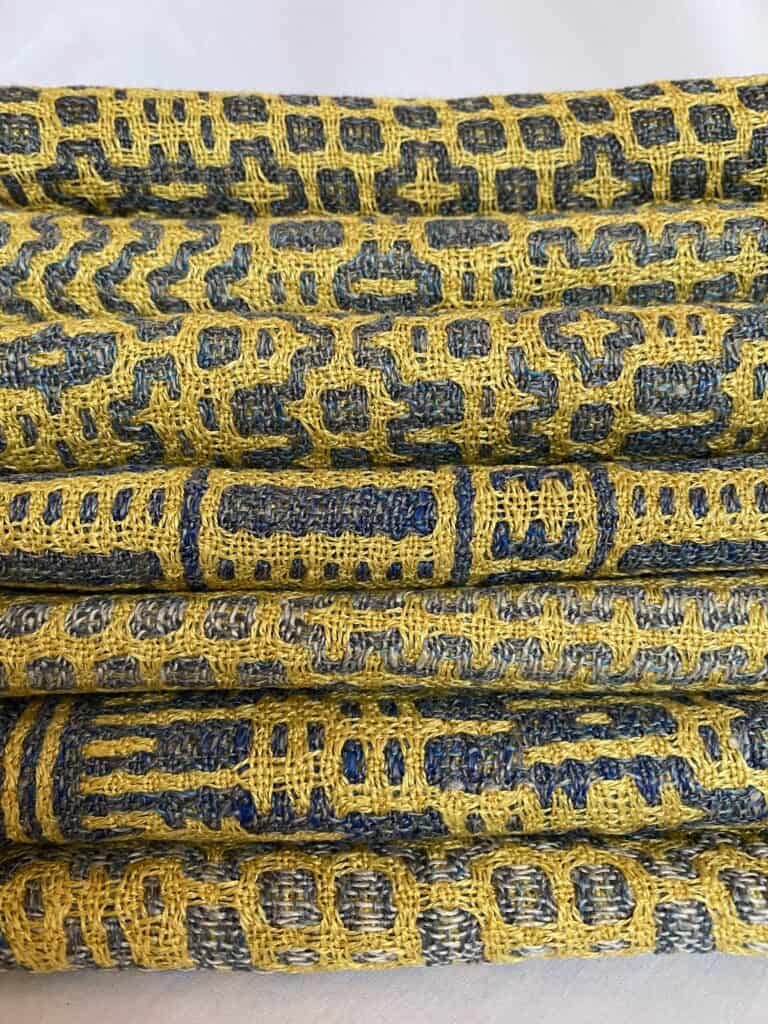 Véronique’s stack o’ napkins in lovely fine linen (notice that she DID square her beat). 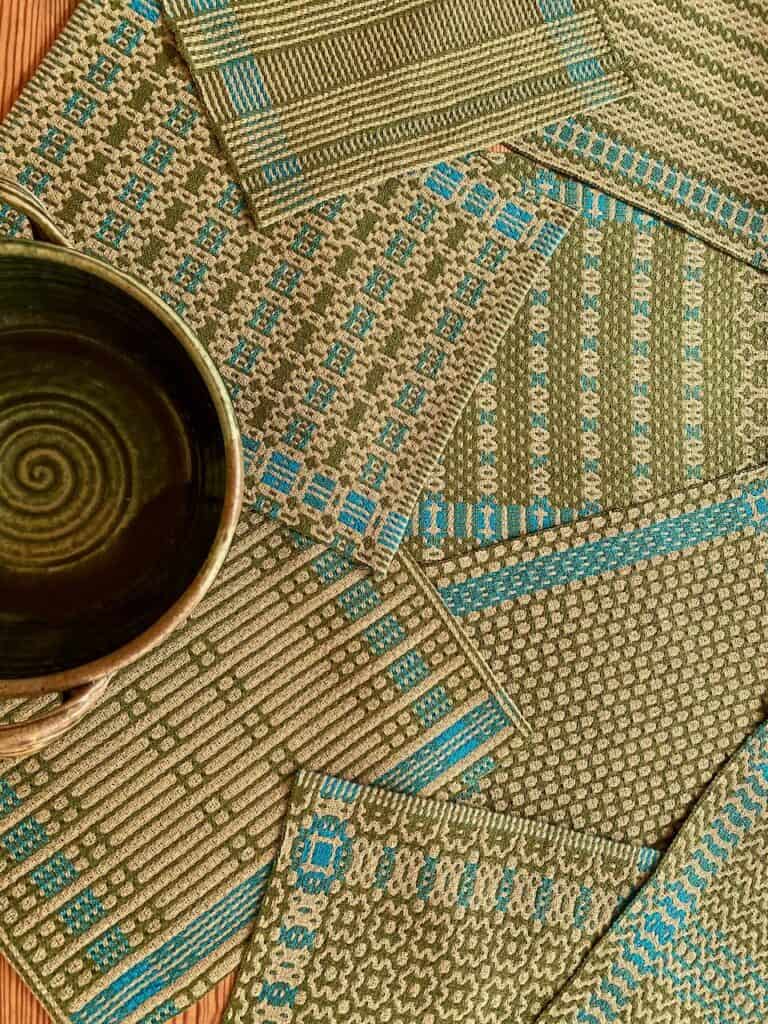 This is the counter argument – I was in a creative flow, thinking about treadling variation and color details, and so maybe (okay definitely) didn’t think about squaring my beat. 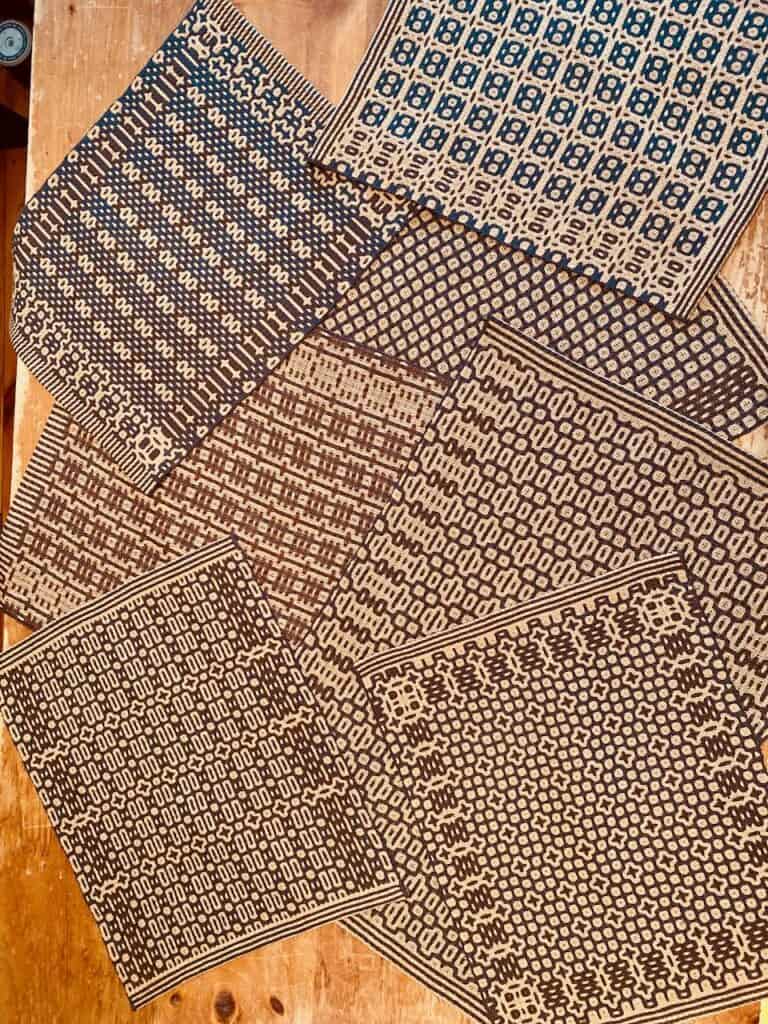 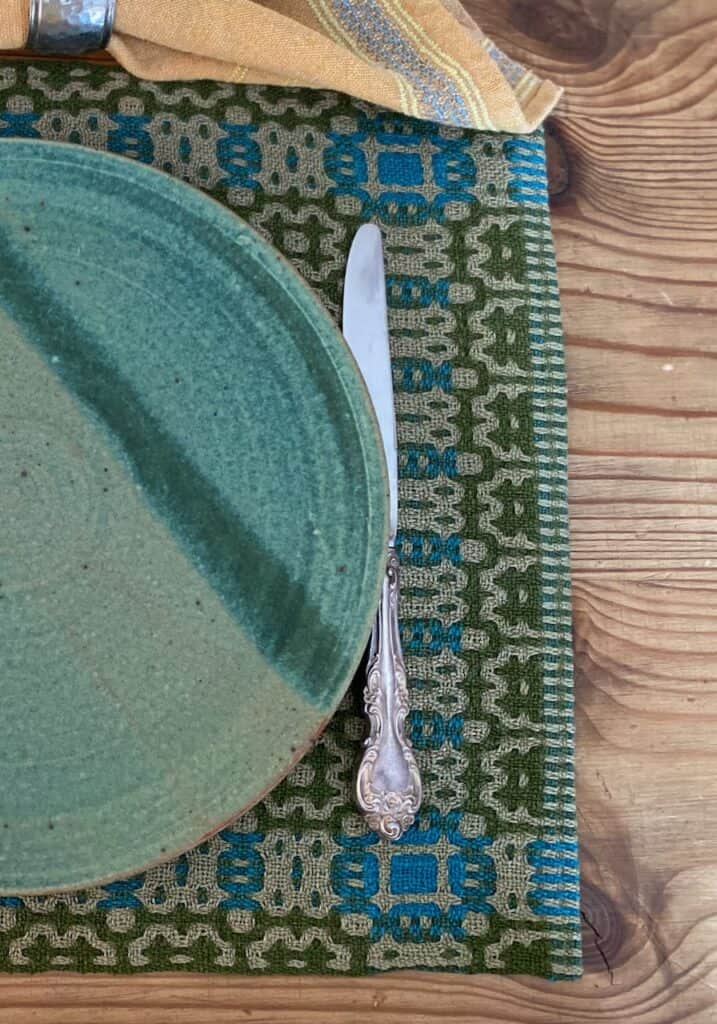 I wrote my pattern to be squared, and adjusted my own repeat count to account for my less-than-square beat, so that I got the placemat dimensions I wanted, but urged the “readers” to square their own beats. As I was editing the pattern, I began to worry that giving the specs based on a square beat while not squaring my own was problematic. What if the sett made it too hard to square? So, I decided to re-weave the mats and really focus on the beat. The result was very interesting to me. The pattern was easy enough to square using a double beat, and lo and behold, I actually preferred the squared fabric once it was off the loom and finished. I had designed it to be a dense fabric that lay flay on the table and didn’t ruck up when plates and cutlery were moved around on it, and the slightly more dense version was better in all ways. It looked better, it felt better, and it functioned better. In the don’t-sweat-the-small-stuff counter argument, “we” would argue that it is only 2 picks off 28 ppi vs 30 ppi.  Dang it. I’d better find my tape measure. The other (obvious to some) advantage was that the repeat count could be woven as designed rather than tweaked and adjusted, so any extra effort expended on squaring was compensated for by not having to tweak the repeats. 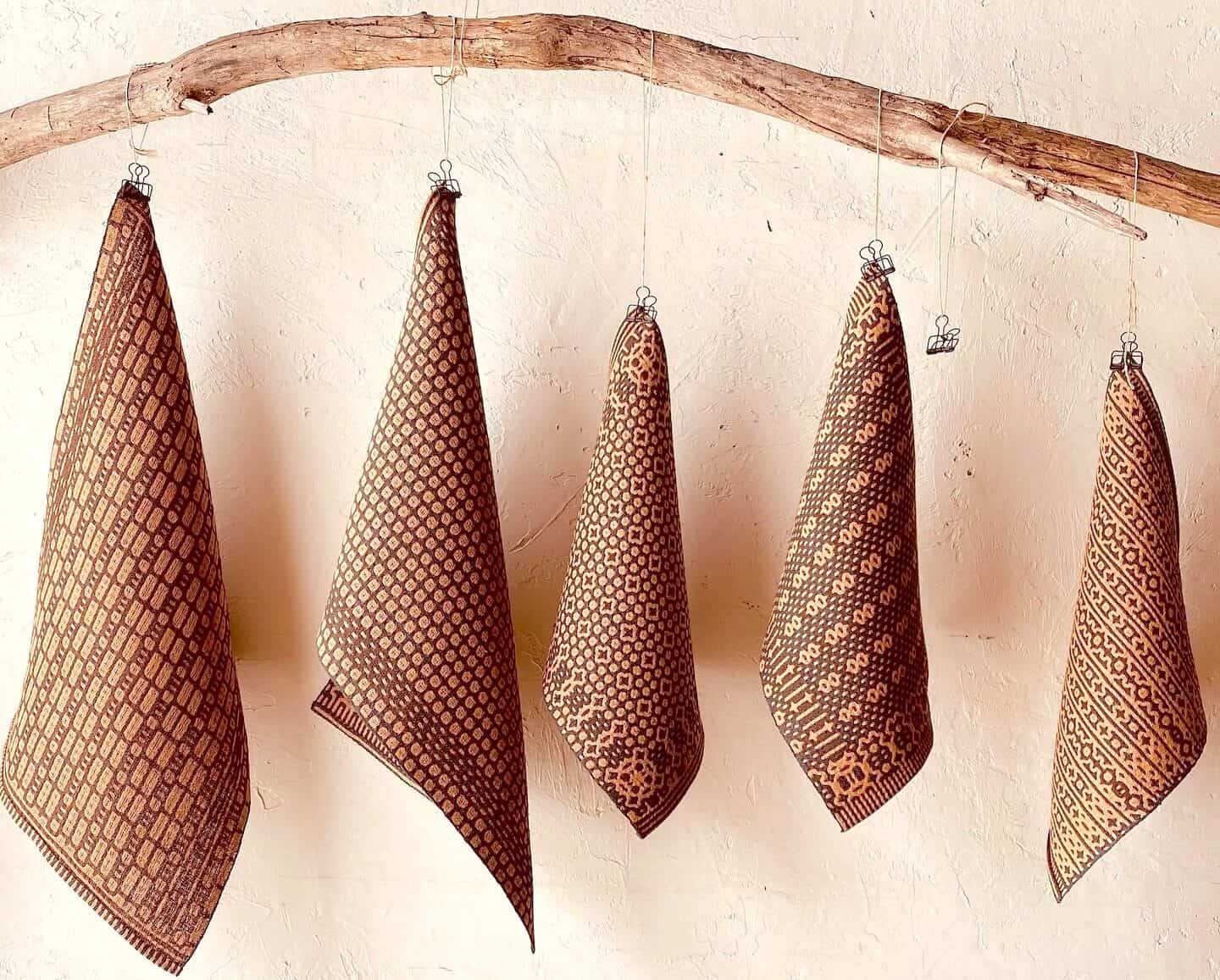 Notice that the “dots” are dottier and the corner motifs pleasingly symmetrical – this pic shows the new placemats at the right and a re-sleyed variation for towels at the left.

Staying on this same “beat” . . . I was also working on a pattern with an entirely different beat issue. For the Hidden Spectrum scarf – a design that is basically a wool tube encasing free flowing colorful tencel – it is essential that one doesn’t square the beat. In order for the “tube” to remain gauzy and open so that the colorful tencel has a chance to peep through, the weaver has to “place” the weft at about 2/3rds the sett. A square beat would make for opaque outer layers and a stiff scarf. 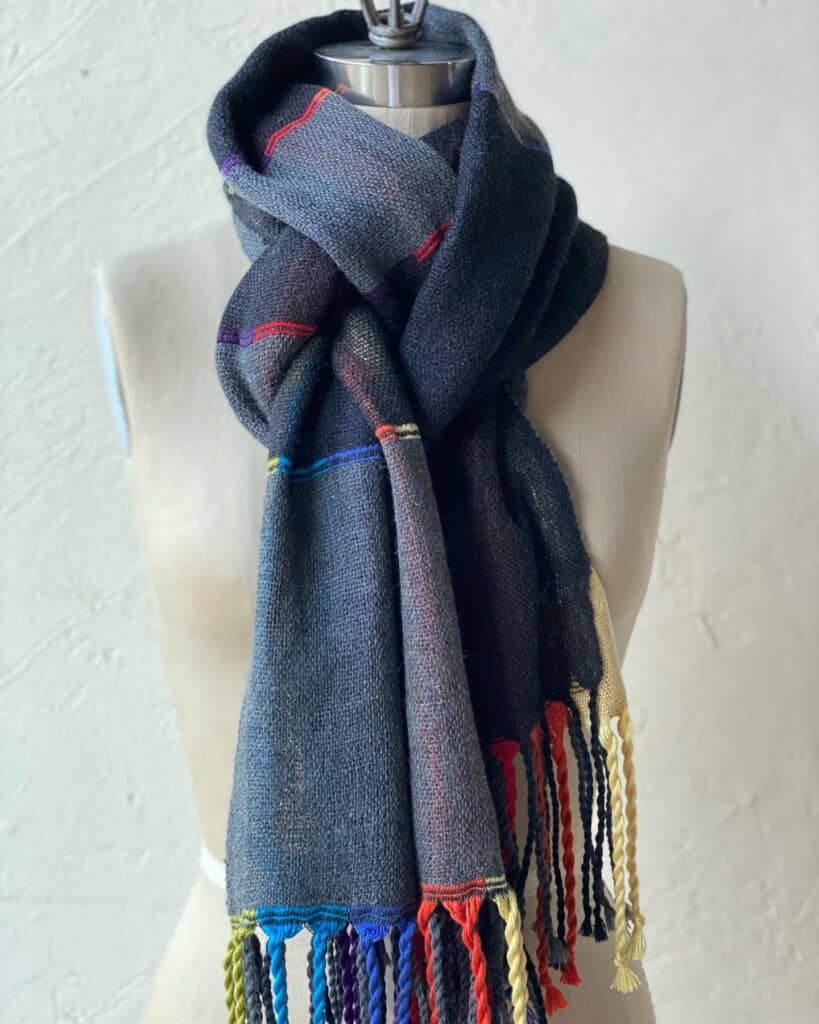 So, once again I was challenging my own weaving mantra of “whatever will be will be.” 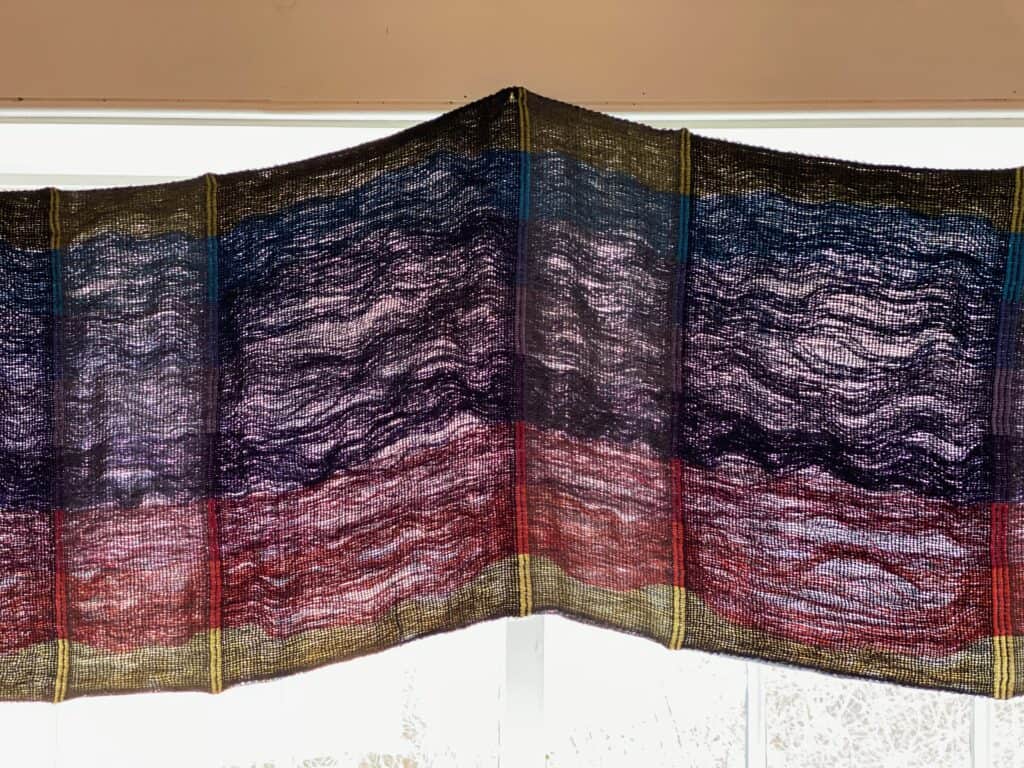 You may wonder why I didn’t sett the outer layers at a looser epi so that I could square and have a gauzy cloth, but I found in my sampling (yes, I did sample –yes, it was a “sample” scarf) that it was a little too unstable at a looser sett.

And the final tale in the “take a beating” trilogy is a double-wide double weave blanket I currently have on the loom. This is another case in which there is a tension (so much pun potential🙄) between the sett and the beat. I have found, after doing many double-wide double weave blankets, that the natural sett for the fiber/structure often creates problems with the layers clinging and not giving a clean shed for the bottom layer. The answer is to sett more loosely than you might otherwise. This accomplishes two things – one is the aforementioned cling prevention; two is that the more open sett and looser beat allow the blankets to full to a glorious softness that one might not get with a more natural sett/beat. 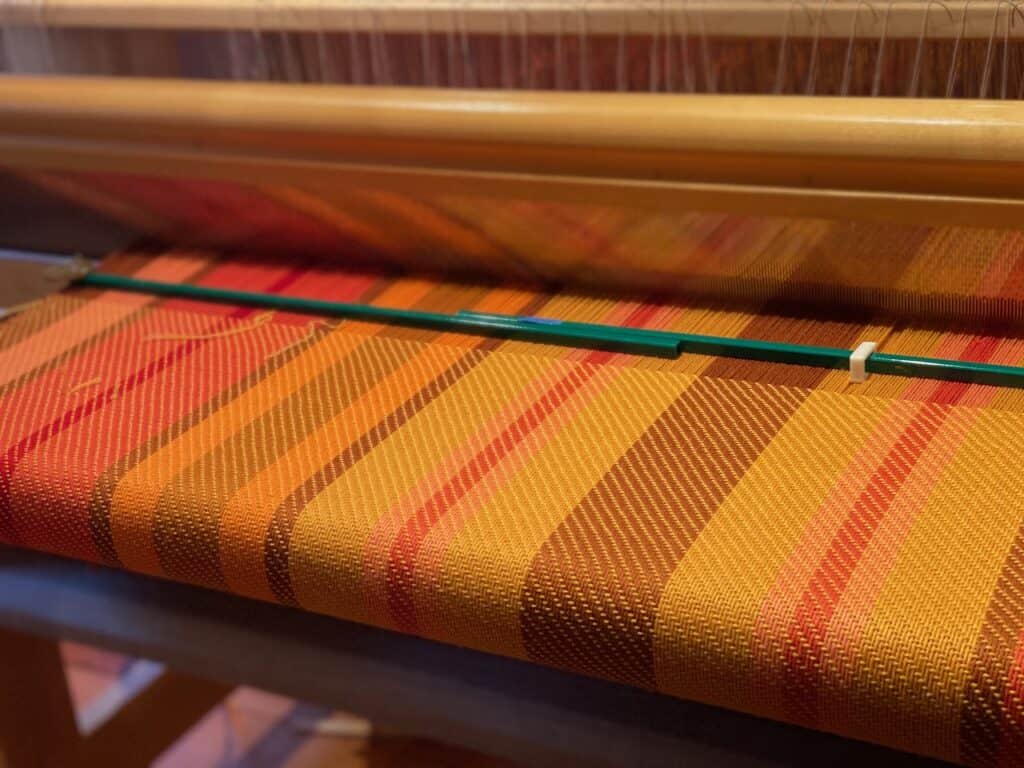 As you can see by the somewhat wiggly but still okay diagonal, it is not a natural beat. The good news is, that once tension is off and the twill takes charge, both the diagonal and the fold fall into place, and the wiggle disappears. (BTW this is a 3/1 twill – highlighting the glorious warp colors of Jaggerspun Green Line wool). 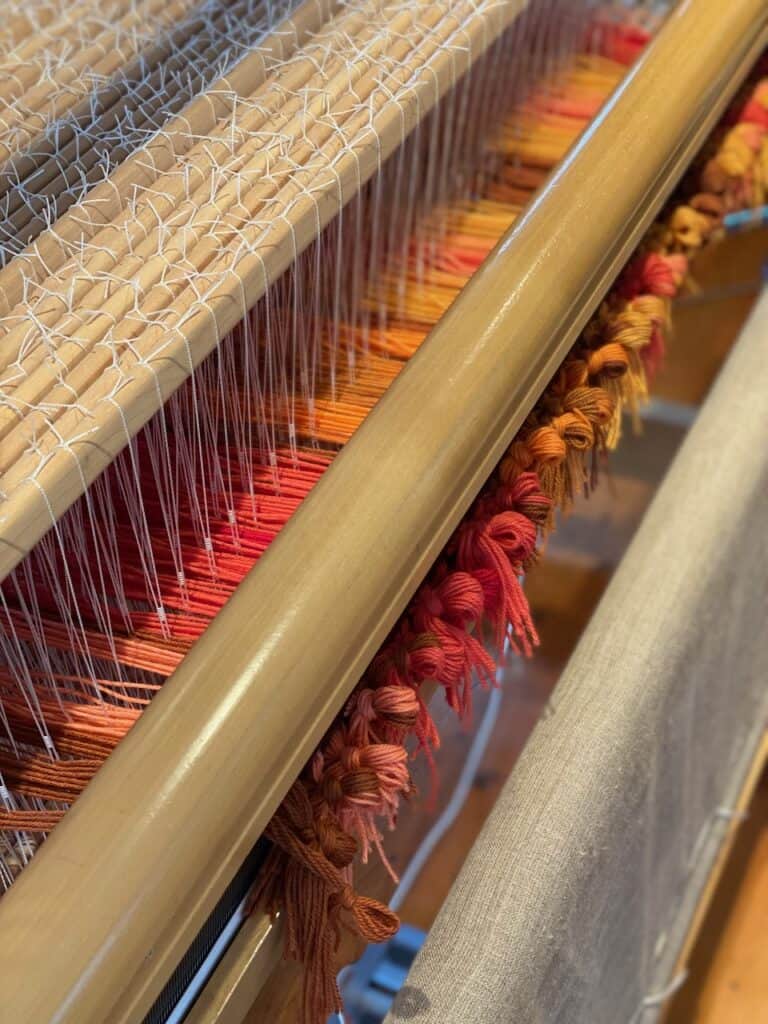 After a lot of mulling and 29 plus years of weaving, my conclusion is “okay, okay beat is important,” but I will add that beat doesn’t beat joy and creative flow in the big scheme, and you can always choose to let your creative spirit flow freely the first round, and then revisit with persnickety perfection on your tail for the second round like I did.  So don’t beat yourself up, have fun, and if you have a hankering look for these new patterns on the Plain Weave Etsy site Flexi-Flax Table Linens and Hidden Spectrum Scarf