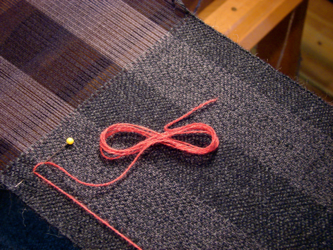 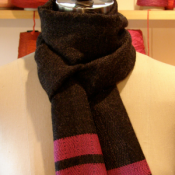 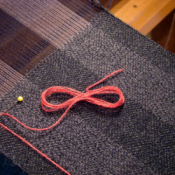 I wanted to check off a masters project, I wanted a warm, soft scarf, and I wanted to use stash yarn. I drafted a twill on opposites. This was pretty much guess work, but this is how I did it. I drafted a pretty point twill using tromp-as-writ treadling. I then went to the tie-up and changed every other treadle tie-up to the opposite of the previous treadle.

It looked pretty good. I had some 8/2 tencel in my stash that I decided to use for the warp. I then thought I would use up a variety of black and grey 2/ply alpaca knitting yarn that I had for the weft. I set it at 24 epi – a twill sett for the 8/2. Here is the lesson. Twill on opposites is dense. Even using silky tencel and soft alpaca – which I imagine would be super drape-y even when densely woven. I can wear the scarf, but is is far from the silky, drape-y scarf I imagined. Also, even the softest yarn gets scratchy when it is held stiffly in place. I am doing a second scarf using a finer alpaca silk for every other pick alternating with tencel. I didn’t widen the sett because I imagined that the opposite picks would just pack in more firmly. I hope I have enough warp to have a small sample at the end to re-sett as an experiment.