Close to the Edge

The Edge… there is no honest way to explain it because the only people who really know where it is are the ones who have gone over. Hunter S. Thompson

What craft can you think of that focusses more on “the edge” than weaving? Metal smithing? Glassblowing? In any case, the edge (both literal and metaphorical) is where I want to dwell for this blog post.

From the very beginning of our weaving lives “selvedges” have a significance that would baffle most civilians.  We obsess about something that technology solved over a hundred years ago.  We buy and improvise temples, we discuss hacks and strategies, we experiment with shuttle angle, and bobbin firmness. We weight and float and re-sley . . . .  and I am interested in all of it except when I’m not.  I don’t really care that much about razor-sharp selvedges if I am transported by a structure or fiber. I don’t care when I get bumpy selvedges on a fabric I like and that I am enjoying weaving. I am not aghast that something hand-made has an element of the hand-made in it. If perfect selvedges are someone’s primary concern, then I can show them a slew of perfect selvedge cloth at the local fabric store.

All that said, let’s talk about selvedges. I want to talk about interesting selvedges, but before I do, I want to make a list of things I have learned about selvedges over the years. Some are truly 101 and some may be more obscure. I’ll try to attribute, but if I have forgotten where I learned something, please feel free to comment and remind me.

Now while “perfect selvedges” are very nice . . . interesting selvedges really float my boat.  I first started thinking about messing around with selvedges as a “necessity is the mother of invention” moment while weaving my master weaver projects. One project was a variation of a structure I had seen in an Ann Sutton book that she called mock leno.  I used it for a multi-colored blanket in 8/2 wool to fulfill my “wool” requirement.  The colors were fab, the beat was spot on, the sett and structure good, but the combo of wide, wool and 2 shuttles made for some not-so-perfect selvedges.  I did not want to re-weave the project because it was good in all the non-selvedge areas, so I decided to hem-stitch around the whole perimeter of the blanket (off loom . . . with weights) about 1½” in on the selvedges.  I then pulled the warp threads out of the web along the 2 selvedges and trimmed the fringe to a little over an inch on all sides.  It looked good, and made e think that we are not slaves to our selvedges, we should make them work for us.

The pix below were another instance of unsatisfactory selvedges that I “fringed” – before and after. 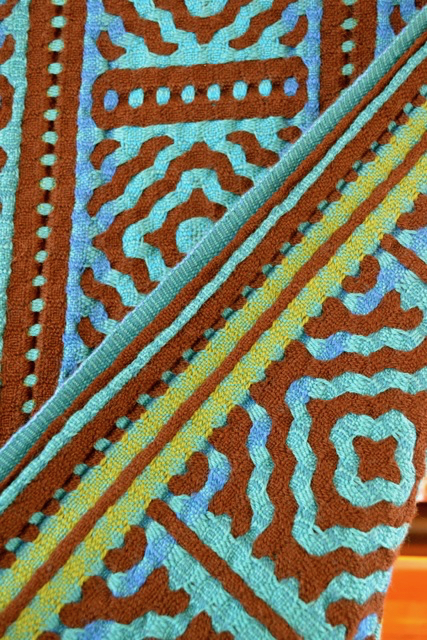 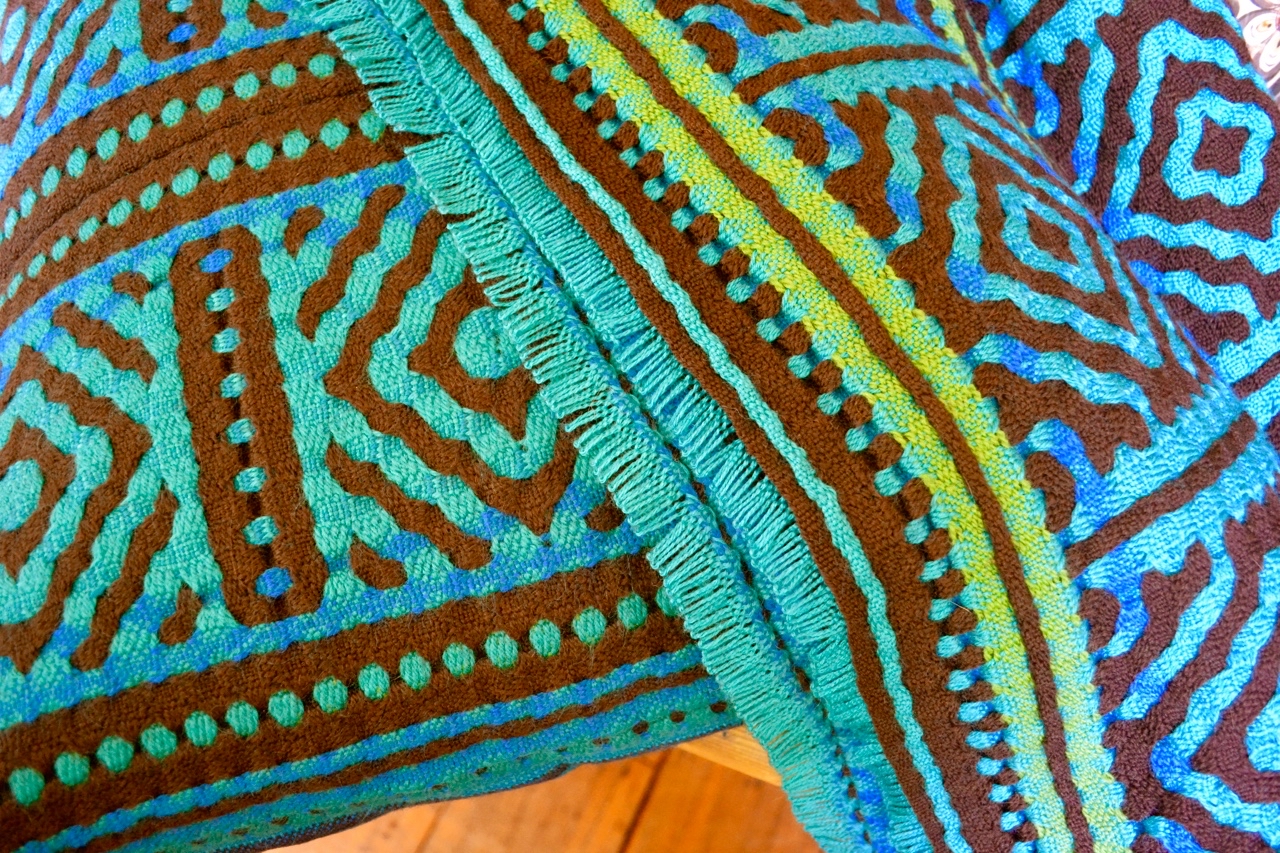 I became enamored of deflected double weave about 6 or 7 years ago, and it was another structure/circumstance that made me really think about how to create an interesting selvedge.  I made 2 videos and posted them on Youtube exploring this notion: Def DW Selvedge 1 and Def DW Selvedges 2.

Turns out one can get the same effect without the shuttle diving.  This was serendipitously discovered in a class I was teaching in Minneapolis. 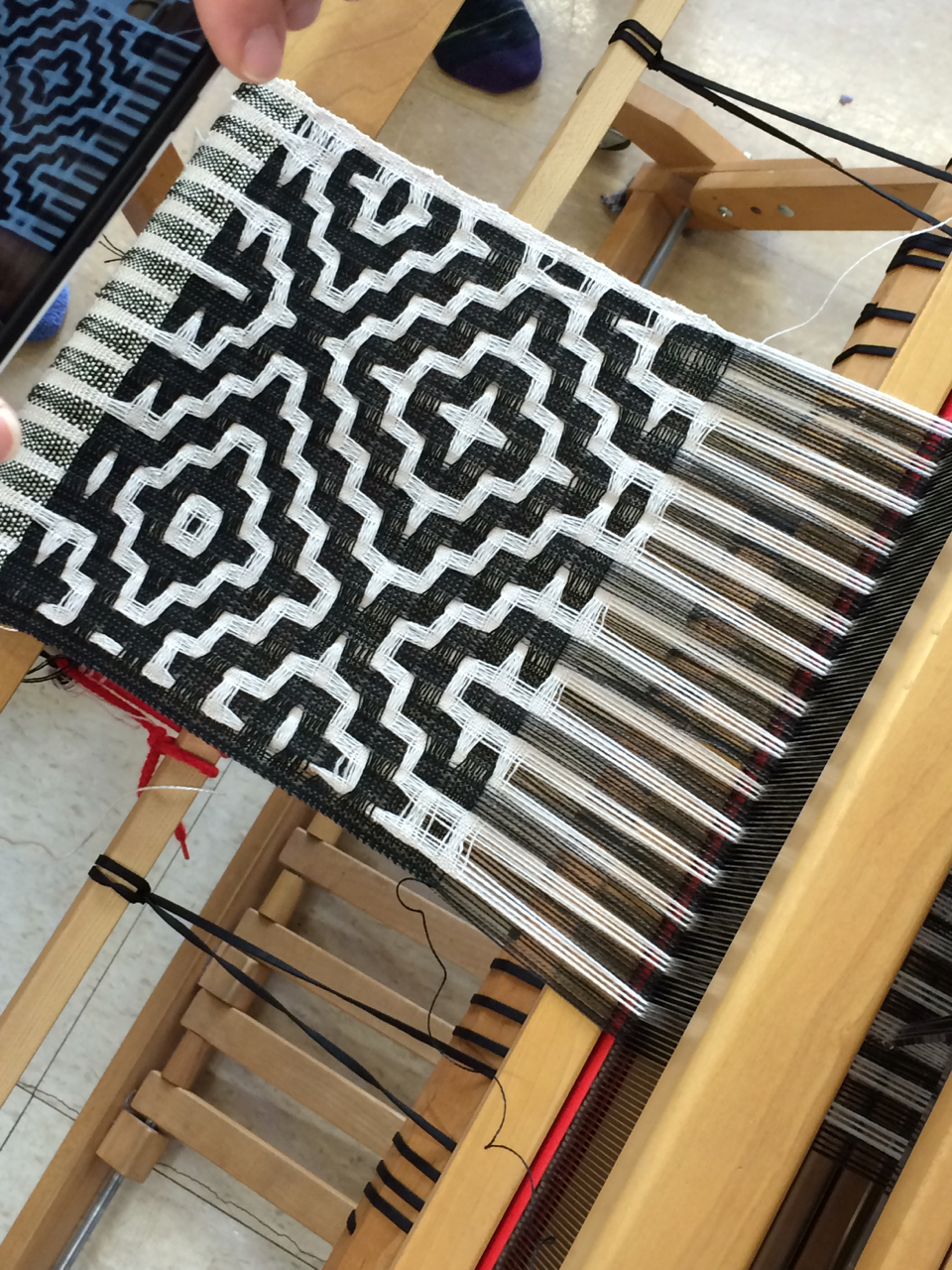 I sent out a wide selection of warps, all in different color schemes and threadings that demonstrate different design ideas for def dw. One asymmetric design was being woven by Robert Bilthouse who happened to start his white shuttle on the white side and his black shuttle on the black side and discovered what I dubbed the “Bilthouse Technique”. No floating selvedge and no shuttle diving – fab selvedges! 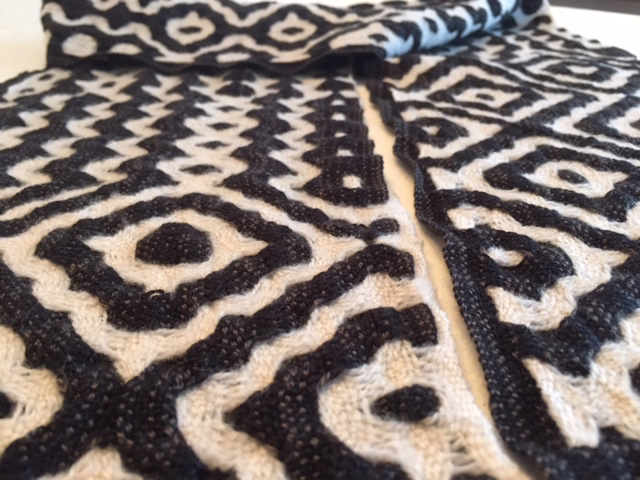 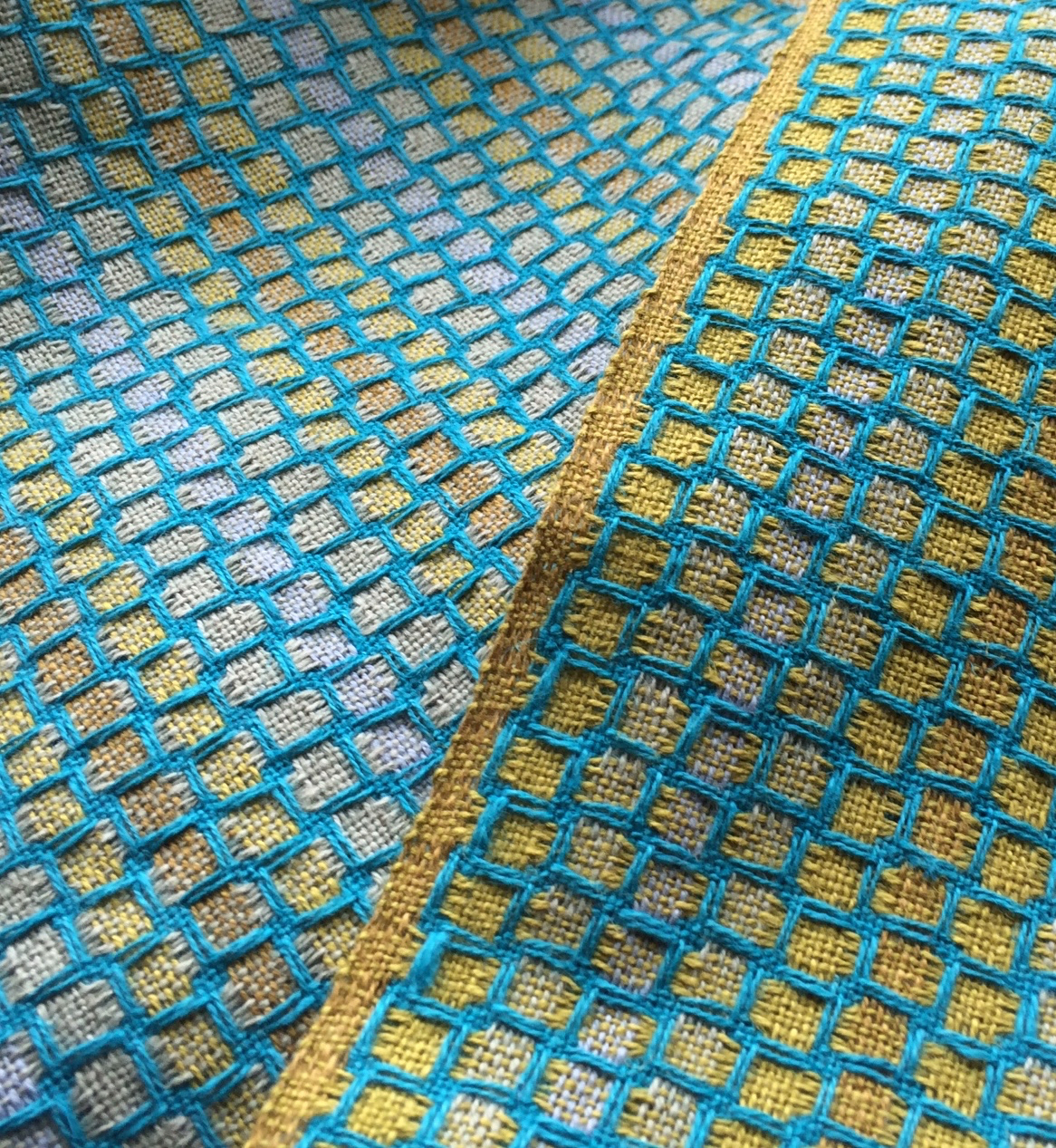 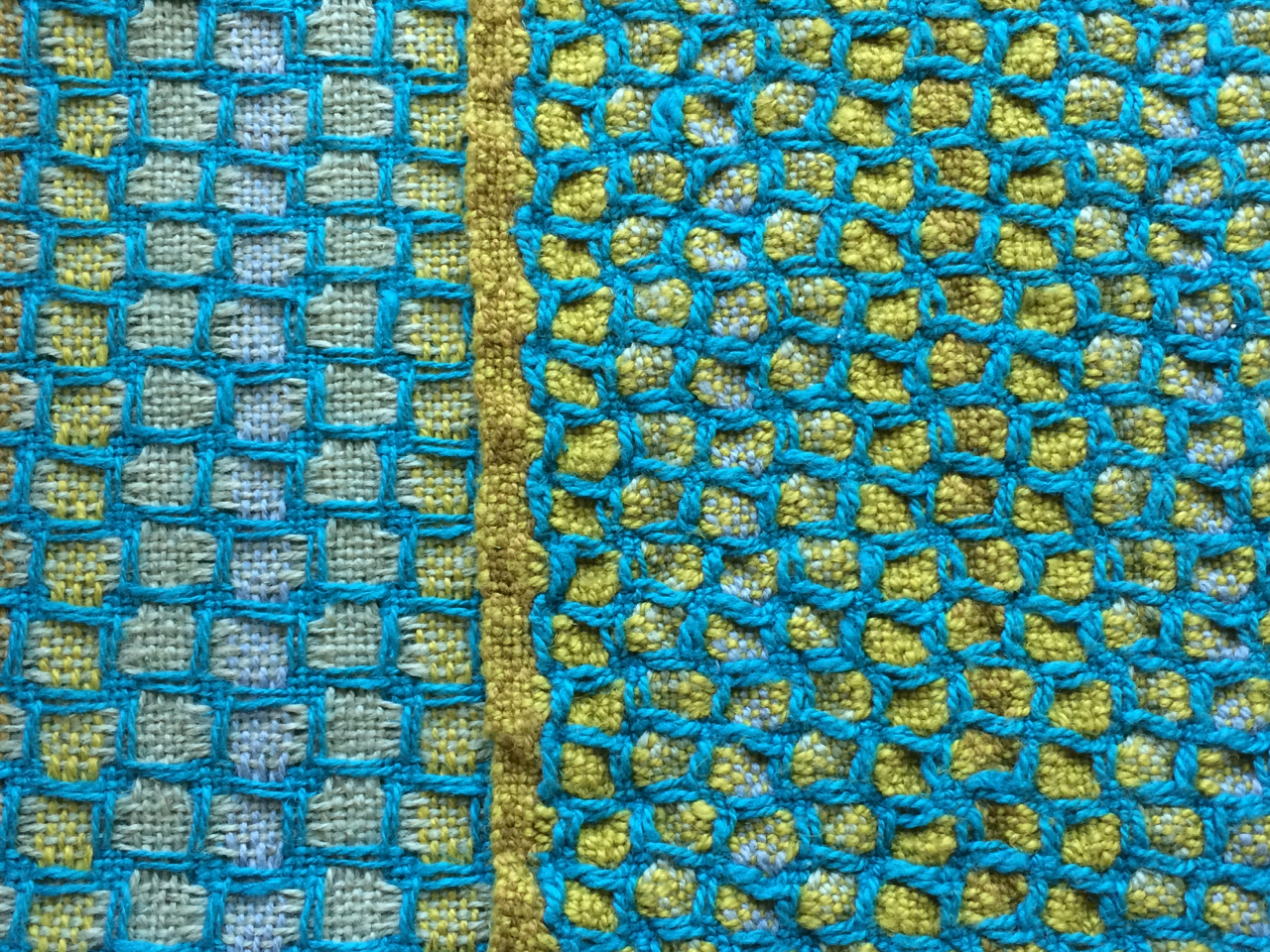 Pebble Weave is another deflecting structure that can be enhanced with shuttle diving . And there are many more. I believe Cristina Garton wrote an article in Handwoven in which she described using “shuttle diving” to clean up selvedges in a pinwheel color and weave. I have gone to extremes in some cases to achieve an interesting (if not perfect) selvedge. 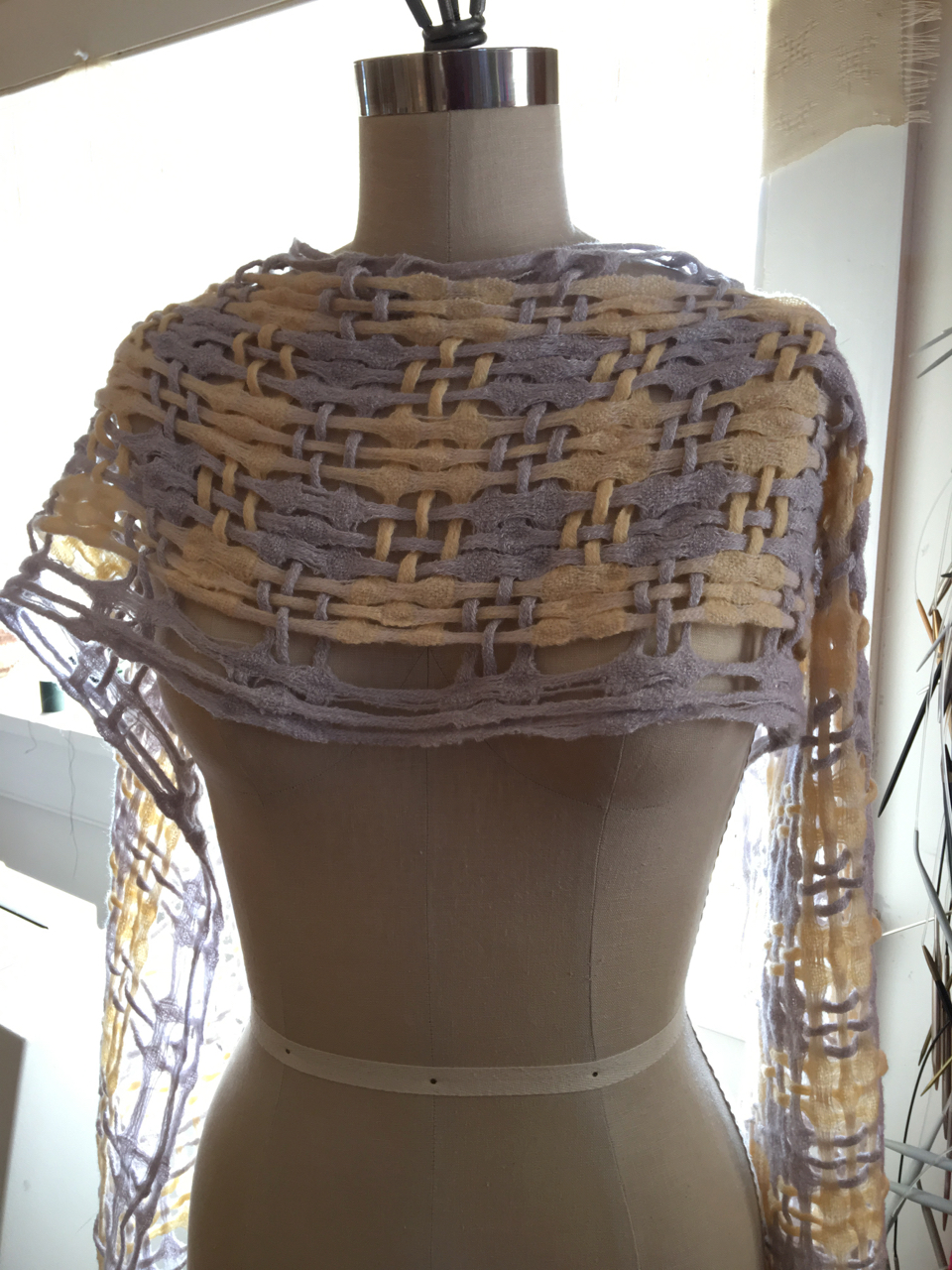 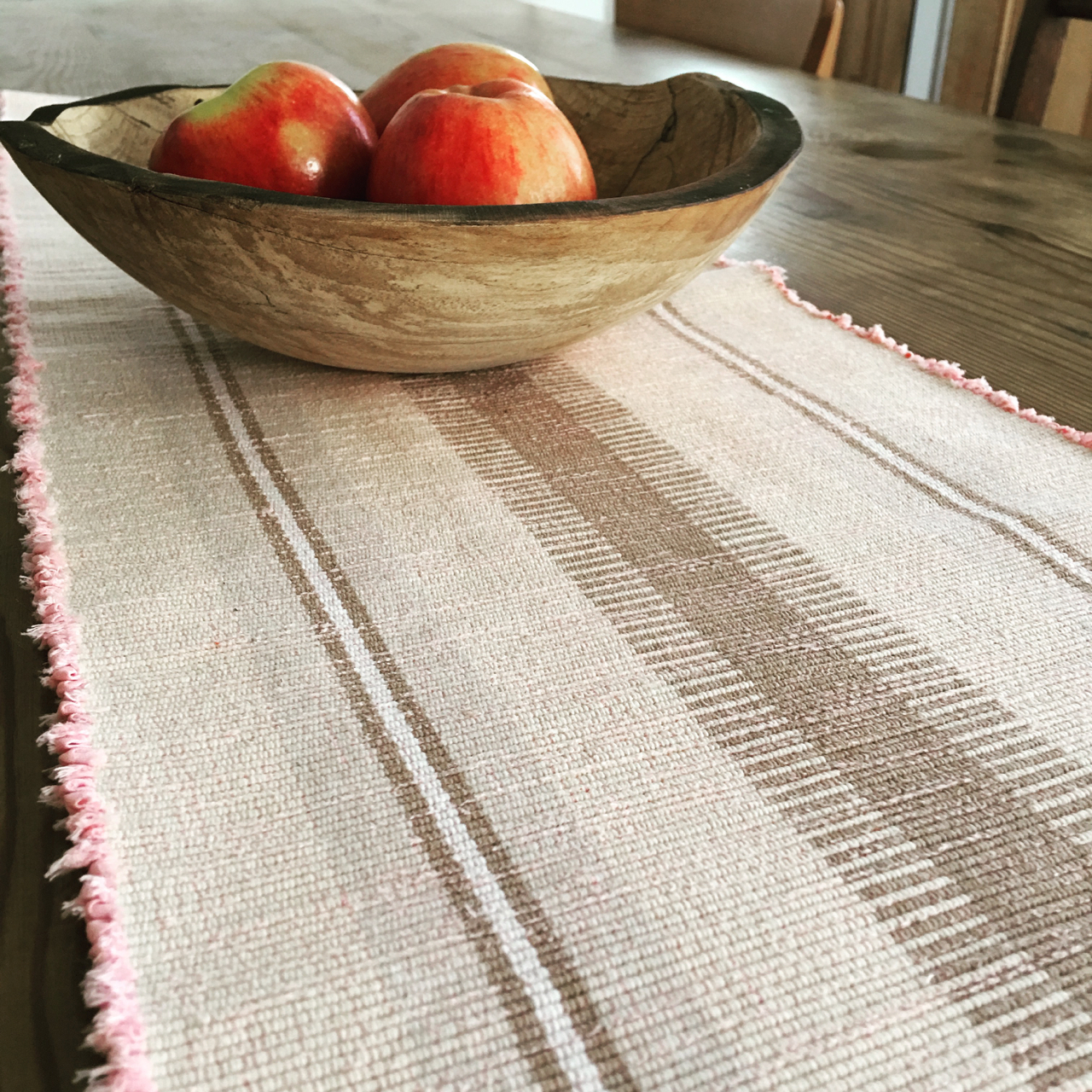 Using some commercial bias strips as weft gave me a pleasing pop of pink texture in this runner.

To float or not to float is a big question among the selvedge obsessed.  To me a floating selvedge is a quick and easy way to clean up some possible messes, but looking at the structure may give you some other ideas. 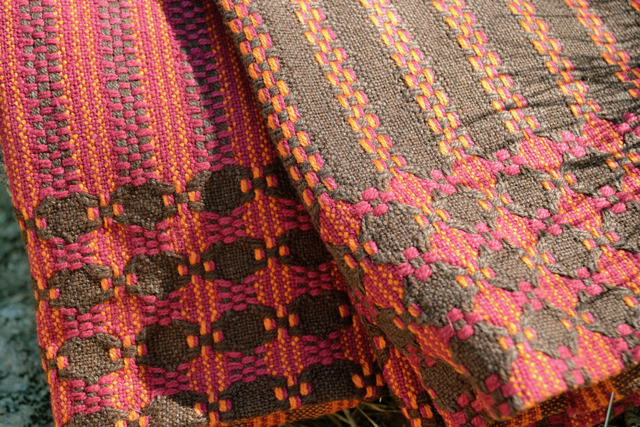 For example, if you look at the towels above, you’ll see in the borders that the “basket weave” float blocks alternate with plain weave blocks.  In the body of the towels one can choose to treadle with the floats in the selvedge blocks – sample on the right (need floating selvedges) or with the selvedge blocks weaving plain weave (sample on the left). 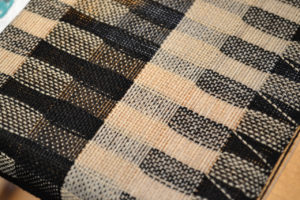 In this neat block double weave variation, you can carry your weft and “stitch the two layers together at the selvedges, or cut and tuck at block changes and have 2 layer selvedges. 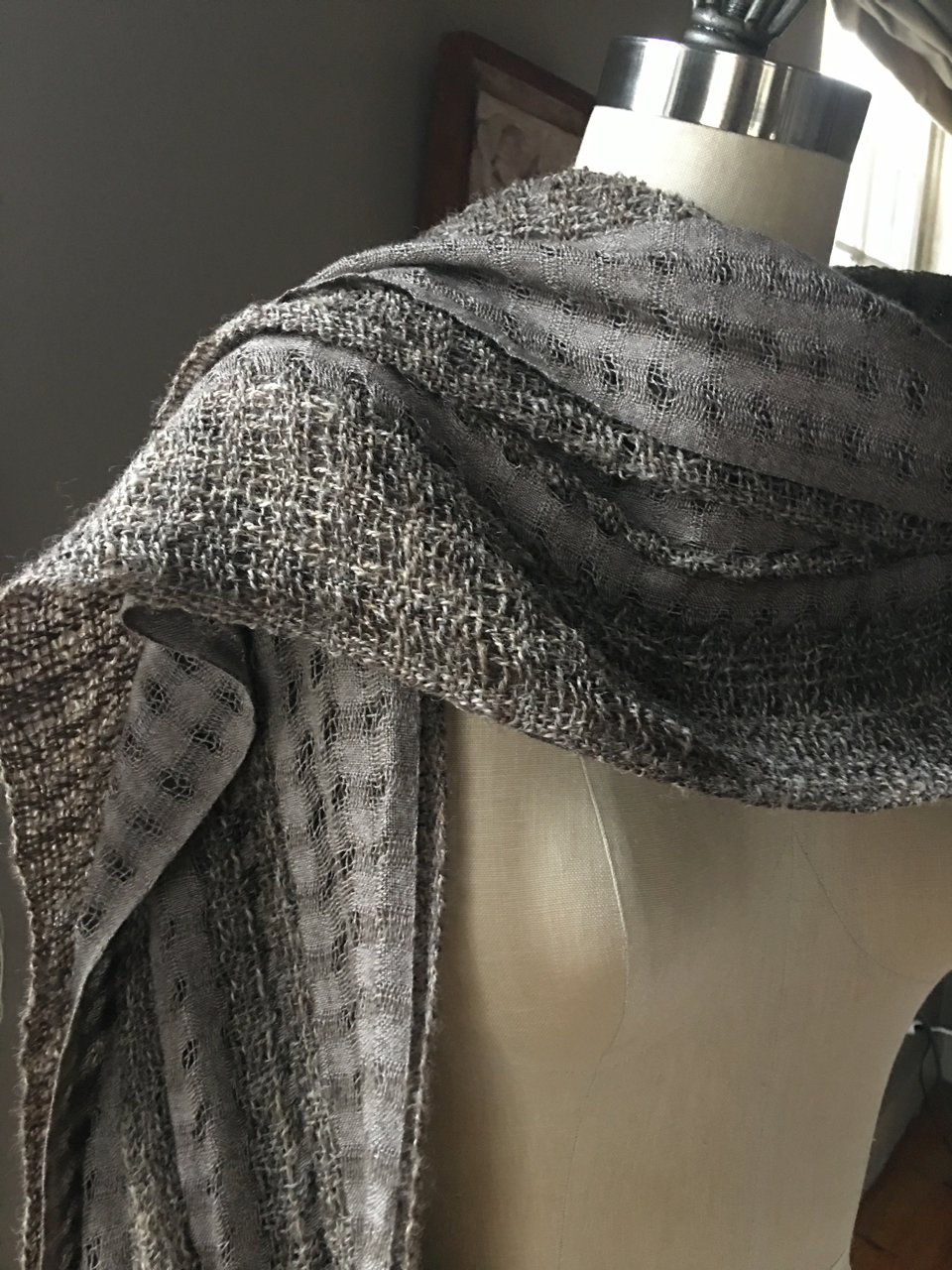 And once again, optimizing the selvedge interest in def dw by tweaking the tie-up and making an elegant 2-layer weave at the edges of this scarf.

So, I guess my message here is that one should try to live on the edge in terms of experimenting and messing around with selvedges rather than living on the edge by being obsessed, tortured and controlled by selvedges.

Next post: Hemmed In –  An in-depth discussion of hemming: controversies/challenges and ideas. Hee hee