They had thought with some reason that there is no more dreadful punishment than futile and hopeless labor.    Albert Camus

I know I have mentioned that my weaving philosophy is generally “what’s the worst that can happen?”  Meaning, have no fear, the worst is a wasted warp (usually with an indelible lesson in return).  Well, I recently got a Lesson – I didn’t lose the whole warp, but I lost A LOT of time.  I have about a dozen “must do” projects lined up, and I was hoping to quickly check off some yardage for a sewing class I am taking this fall.  I was inspired by some beautiful lambswool singles on sale as mill ends at WEBS in a huge variety of browns and some double weave I had seen by (amazing weaver) Fran Curren who arranges her threading blocks and color blocks so that they are out of synch giving the fabric a really interesting complexity.  I wanted to wind a longish (8 yards) warp so that I could experiment with treadling variations and possibly even weave some of the yardage as double-width.  I mixed some 30s singles with some 15/2 plied yarns (for color reasons) and made a hasty decision to save time that resulted (I know Grandma!!) in a huge waste of time.  I wound with 4 in hand (some plied, some singles used together), which often works beautifully, but turns out (I would have known that had I given it even a few minutes consideration) to be a very bad idea for a bunch of unruly, fine singles.  The warp beamed okay, but I could already see trouble brewing as I spied little pigtails poking up where the singles had plied back on themselves, but I had made my decision and I pressed on.  As you can imagine, I fought with this beast the whole way. breakage, tension issues, issues advancing the warp, etc.  I cut off after 2 yards and rethreaded some of the super unruly sections more coarsely and continued weaving.  I cut off after 2 more yards and re-tensioned, and finally I cut off after about 6 of the 8 yards had been woven because I just could not spare more time fighting this beasty.  I want so much to believe that I learned the age-old “haste makes waste” lesson, but I have learned it so many times in the past, I have my doubts.  Anyway, here are pics of the yardage – okay, but definitely not worth the pain. 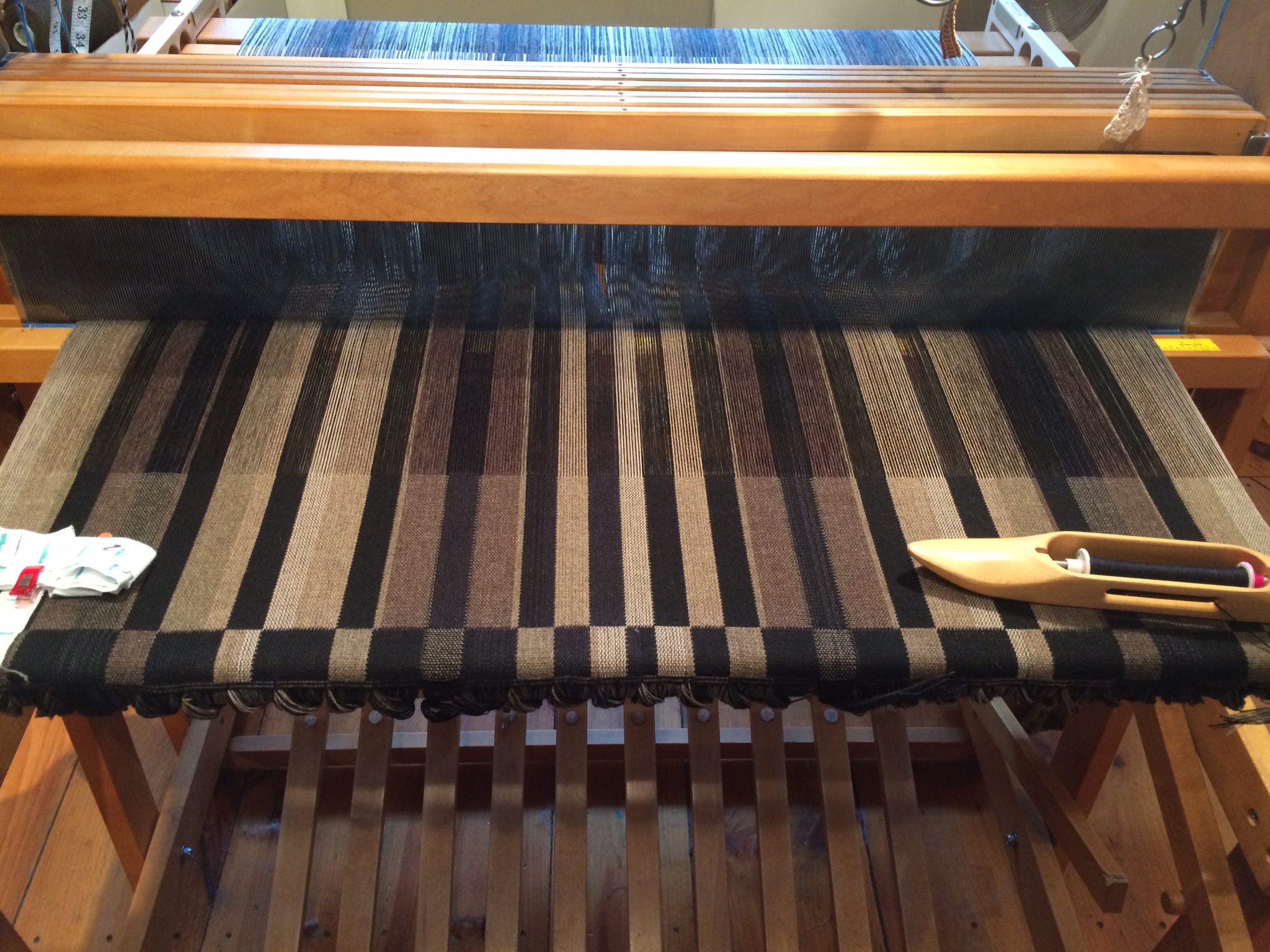 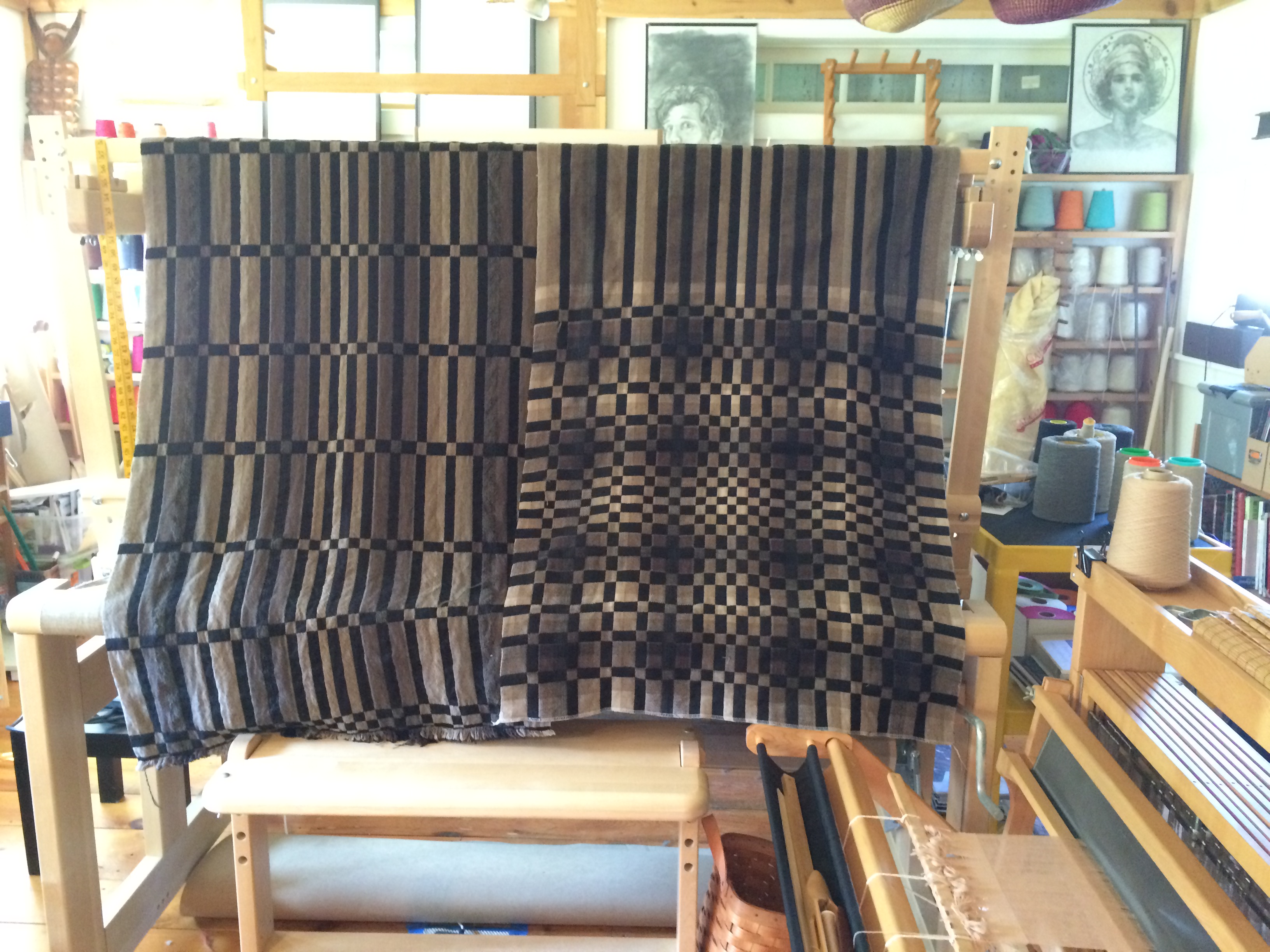 I had a great class at NEWS, many wonderful, accomplished weavers (who seemed) willing to forgive the errata that I frequently encounter in the maiden voyage of my classes. 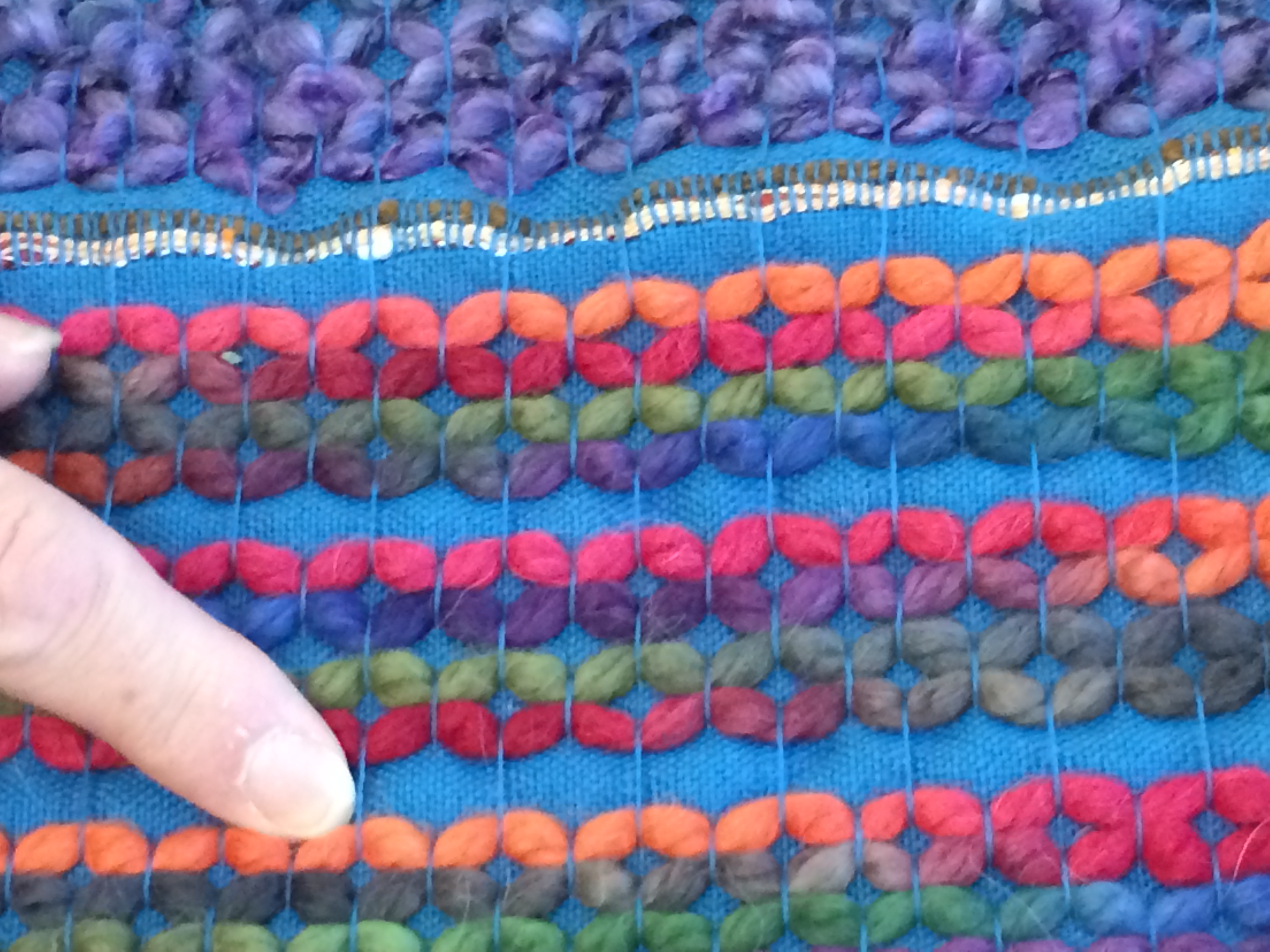 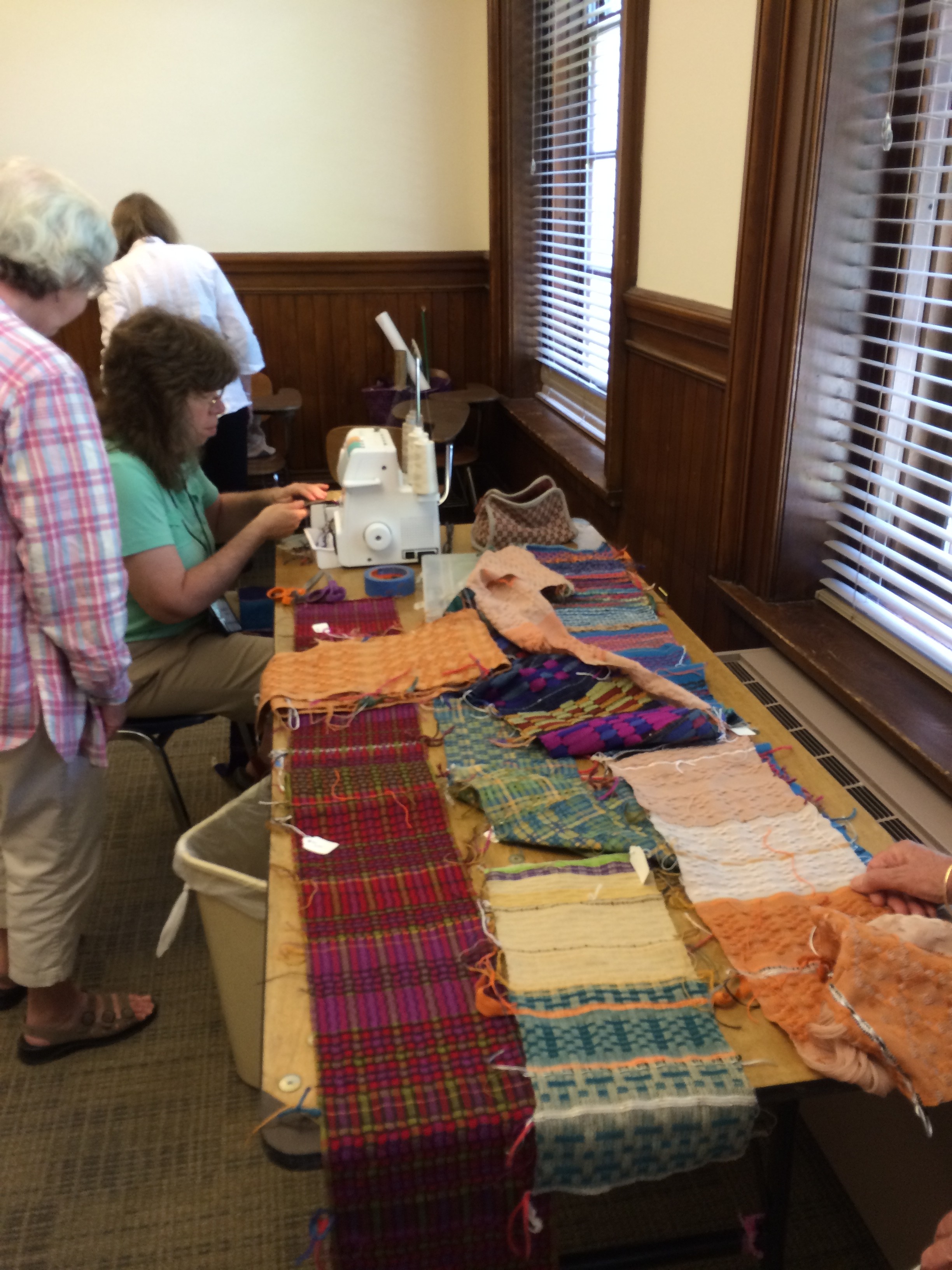 After NEWS I got some serious summer treats – an invitation to weave a coverlet at Vavstuga. With I rainbow of colored wools available, I froze (pun intended) and chose a variety of winter-y whites and creams. I then used Lucienne Coiffman’s wonderful new book on rep weave http://www.lucienne-repweave.com/book1.html to pick a draft for a band that I thought looked like ice crystals. To top it all off, I met with a friend and colleague of Becky’s, Tom from Leprechaun Sheepskins http://www.lsheepskin.com/ and am now fully prepared for winter: 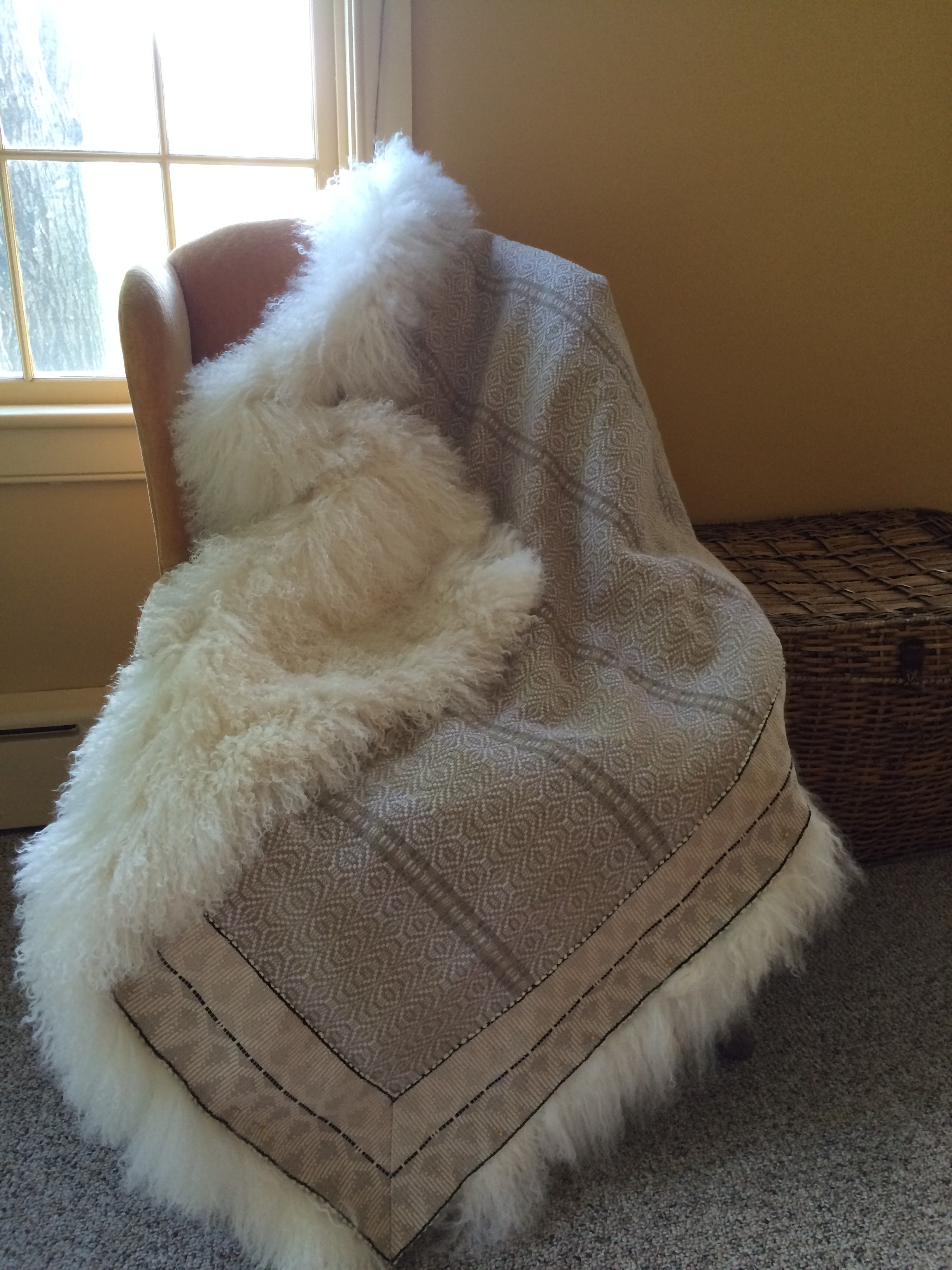 Another wonderful summer treat was a week on Cape Cod with my daughter, her husband, my youngest son, my niece and my husband. We had great weather with a little typical New England mixed in. (my niece bundled up for some New England sun bathing) 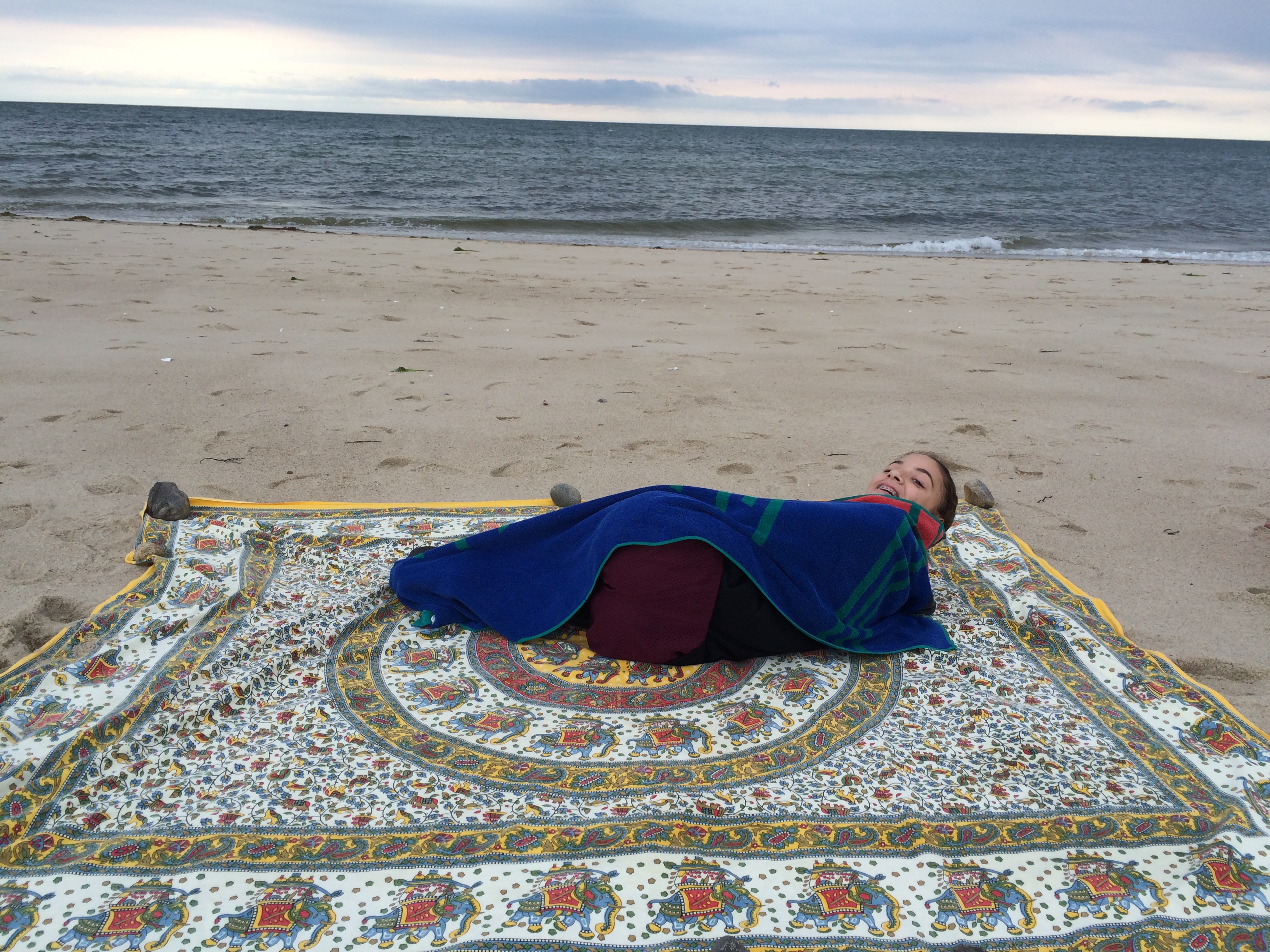 After weaving the coverlet, I went home trying to think of some sewing projects for smaller amounts of fabric that we can work on at Vavstuga in the fall.  One that I am working on (hoping to get Tom’s sheepskins into the mix) are handwoven slippers: 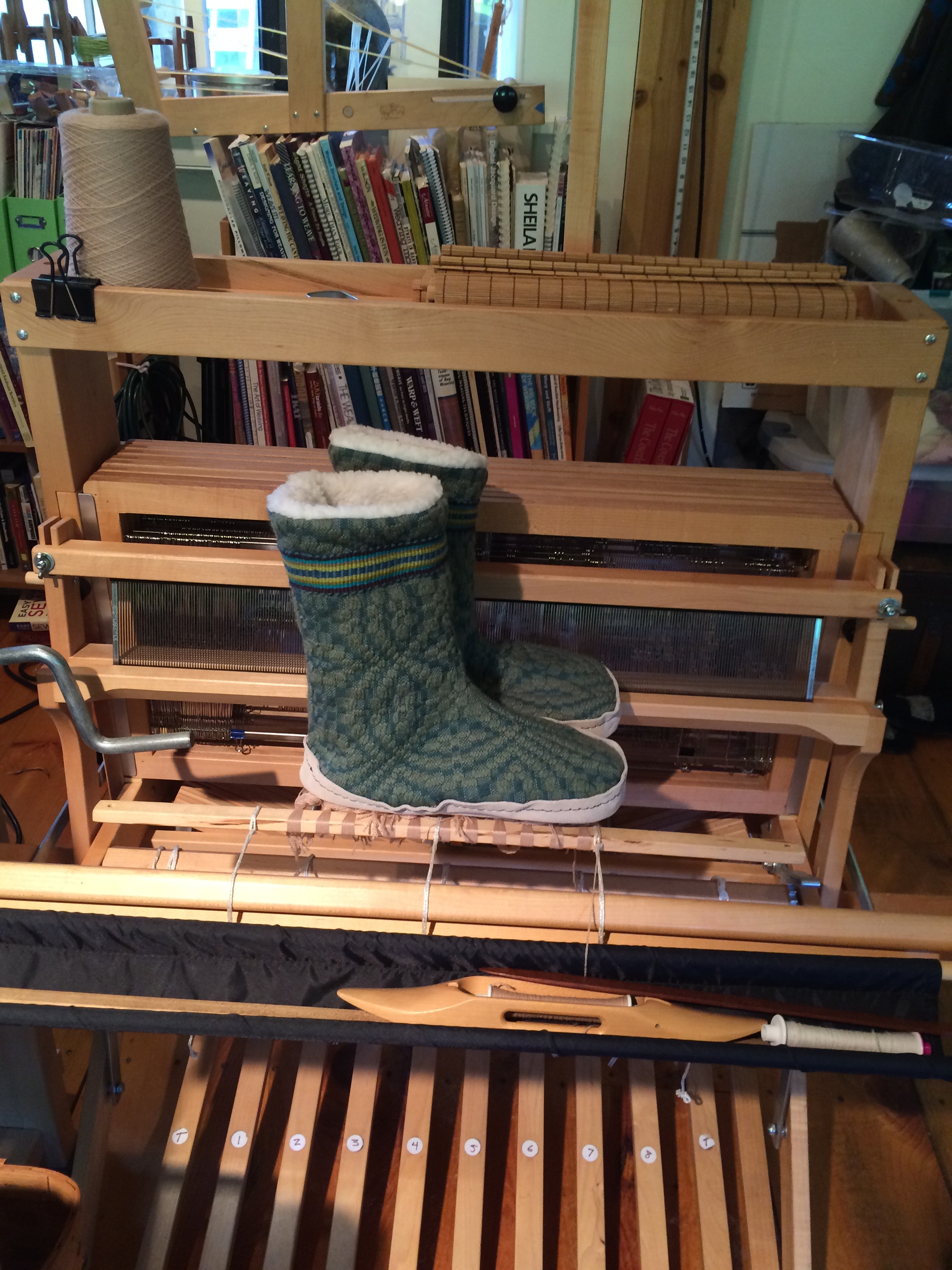 I tried to sew some lambskins for a pair for Becky, but it was tough going. My sewing machine kept missing the bobbin thread.  I read about it, and am hoping to solve the problem with some leather needles, but if anyone has experience/advice – it would be much appreciated.