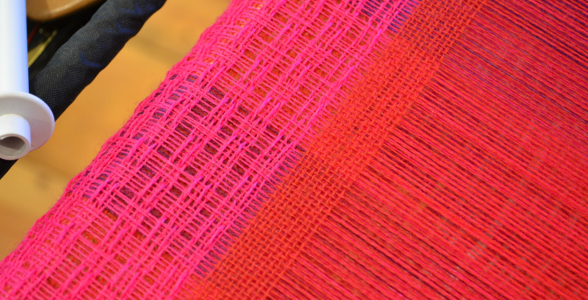 If you are a hand weaver in the modern, developed world, I will say that you are probably somewhere on the Obsessive Compulsive scale . . . but in a good way, right?  I mean, without the aid of a little compulsion how would we deal with all those tiny, thin threads?

I was a little worried that I wasn’t keeping track of which weaving books I owned, which I had borrowed, which I wanted, etc.  I had tentatively entered the world of LibraryThing a couple of years ago, but I had the unfortunate coincidence of having my website crash after adding the LibraryThing widget (turns out to have been completely unrelated) which made me retreat from cataloguing of all my books.  Until a couple of weeks ago . . . have you noticed the steep decline in blog posts directly related to a steep decline in loom output?  Well, you can blame Book Crawler.  It is an iPhone app that allows you to catalogue all your books so that you can have your library with you on your phone at all times.  You can add books by typing in the ISBN, the authors name, the title or by doing a search on Google books or (best yet) by using your phone as an ISBN scanner so that the book is entered automatically. Why would you want that? You ask. For when you are at the Guild sale and can’t remember which books you wanted.  For when you are trying to remember the author of a book to recommend to a friend. For keeping track of which books you’ve borrowed and which you’ve lent. For searching your library for books on Overshot or Double weave, and on and on.  As you can see I am an enthusiast.

I do have another triple weave on the loom though:))  I asked for some feedback at the last meeting of my weaving group, and Laurie Autio (amazing weaving mind!) advised me to use lace in order to achieve a stable open fabric to show off the unwoven threads.  The photo above shows a section of it on the loom.  It is fushia wool on one surface, red wool on the plain weave side (I couldn’t get 2 blocks of lace on both sides with the unwoven threads in heddles on 8 shafts . . . I don’t think) and 10/2 bamboo in red/purple as the unwoven threads. This time (following Laurie’s suggestion) I spaced the unwoven threads in groups so more movement will be seen – hopefully.