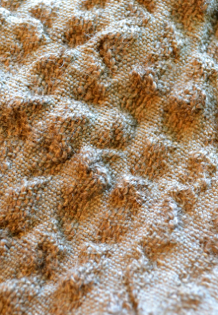 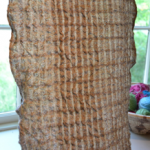 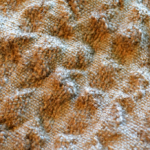 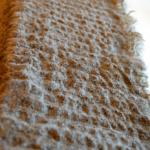 I was so inspired by “Weaving Textiles That Shape Themselves” by Ann Richards and “Magical Materials to Weave” by Lotte Dalgaard that I decided to play around a little bit with the Hand-spun & Linen warp. After I wove off the Deflected Doubleweave scarf (a few woes that I won’t go into right now), I wove a runner-sized sample in plainweave using 40/2 linen weft with 4 picks every inch or so of handspun. I then changed the tie-up and wove a small sample in honeycomb. I am so excited by the results, and I can see some of the effects mentioned by Ann Richards immediately. Even though my handspun was plied and seemed to be balanced, the variation in my turns per inch really seems to have an impact in making the pw sample bubble. Can you see the strange series of darker stripes in the far left photo? I think that is a result of finishing with one hand-spun skein and starting with another while winding the warp. One must have been slightly more tightly spun than the other. I don’t think it has to do with S or Z spun because I always spin Z and ply S . . . I think. Oh, the depths one could explore . . .

One more thing – Apple has taken away my “comments” feature, but I have received some great emails from readers that mean so much to me. I am not averse to talking to myself, but it is so much nicer to have a conversation. So, if you want to comment, say hi or rant with me just send me a line at elisabethhill@comcast.net. I would love it!