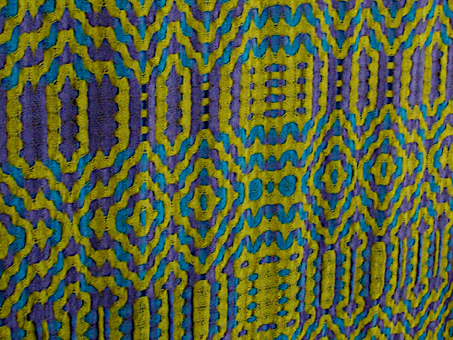 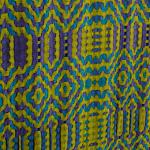 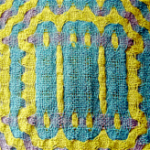 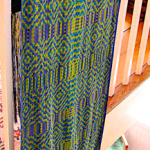 I just got this piece off the loom and it is hanging to dry. It is a deflected doubleweave shawl in 16/2 bamboo from Brassard et Fil in Quebec. It is 25 inches wide and 80 ish long. It is set at 36 epi. I used a 12 dent reed and sleyed at 3/dent except at the selvedges where I sleyed at 4/dent for beat and stability. I made some good decisions in terms of sett and color – I think. The texture is good and after washing it feels very stable.

The densely set selvedges seemed to force the weft to behave strangely – not beating in evenly and I don’t know whether this is because of the multiple threads per dent – would it have behaved differently if I had used a finer reed at the same set? DDW selvedges are already somewhat strange because only one block out of two is woven – every other block is either a float or skipped. Other than the selvedges I also made two treadling/repeat errors – thus the “why oh why?”