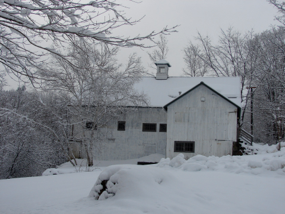 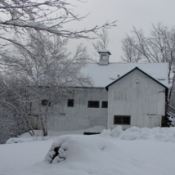 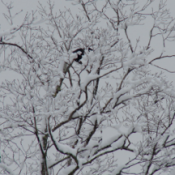 I took the snow picts on my way out to the studio this morning. I would have pictures of the finished Cotton Baby – BUT – I ran out of one of the weft colors just 3” short of the end. Sigh! Tomorrow it will be done. While I wove the “boys” went to a sledding party hosted by the town Parks & Recreation Committee and then came home and played the the dreaded (for me) 6-hour-long – hundred-card – million-rule game called Arkham Horror (aptly named in my opinion).

I am following the on-going and somewhat heated debate concerning weaving terminology on the Weave-Tech yahoo group. The opinions range from the “what does it matter what we call it if we know what we are talking about” to the very firmly-held and vigorously argued “learn the craft thoroughly – including vocabulary – modern and traditional – before you venture to talk about it” and everything in between. The terms that sparked the debate are porrey and portee – one being the threading cross and the other the raddle-cross. I had never heard either until the debate on Weave-Tech. I think the subtext of many of these heated debates is the frustration that some professional/trained weavers feel about the fact that people can weave and call themselves weavers with almost no formal training. I can sympathize to some extent, but I personally love that the loom supports you through the learning process – that you can weave something you like the first time you sit at the loom – that there is a wide spectrum of weavers from the formally-trained weaving scholars to the sticks and string free spirits. Would you love a beautiful piece of weaving any less if you learned that the weaver didn’t know what a porrey cross was?