I have to confess that the inspiration for this post may be a little self serving, but I have been wrestling with the idea of errors lately. This is mostly due to the humiliating necessity of sending out corrections (often several) for patterns that I sell on Etsy. I sometimes feel that the errors must be breeding once the patterns are published because I SWEAR they were not there when I went over and over the patterns prior to publishing. This suspicion has led me to want to talk about the many facets of MISTAKES. Why do we make them, how should we handle them, what impact should they have on our sense of self, and what (if any) good are they? 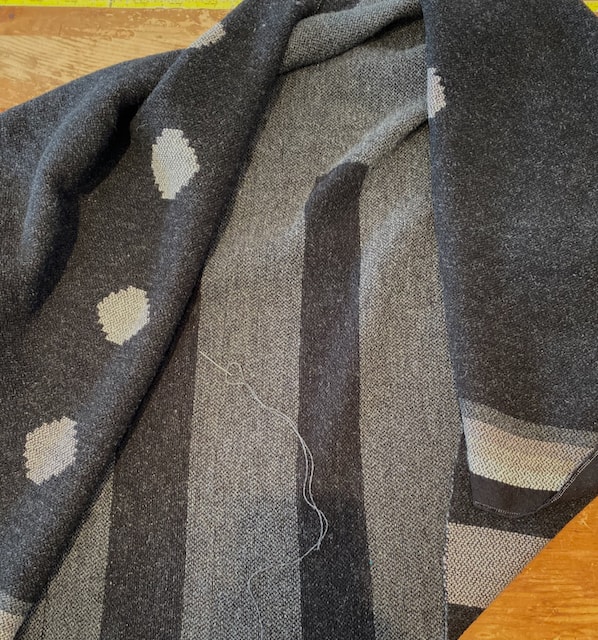 Burling is a b@#$ch when working with a black warp!

“To err is human, to forgive divine” wrote Alexander Pope, but berating ourselves for the errors we make is also human, whether we are at our looms just noticing a threading error after we have already completed several inches of weaving, or seeing a typo only after an important email is sent.

not seeing an error until it is all you can see

If we hate them so much why do we make them? Of course there are obvious reasons: we are distracted, we are rushing, we are trying something new that we just aren’t very good at yet, we don’t care quite enough, we care too much and flub as a consequence, etc. But why do I make mistakes when I am really, really trying not to? There are times when I can control this. For example, I recently wove some curtain panels using handspun (by Jill Holbrook) for an article in Ply Magazine. I received the meticulously-spun yarn from Jill, and I felt like I was responsible for someone’s first-born child. Throughout every step of the process I reminded myself, “take care, you cannot ask for more yarn, don’t mess up!” I checked myself when I felt the pull of “it’ll be fine . . .” and re-engaged fully. This told me that I had a bit of a habit of letting myself off the hook at moments when my attention waned. I recently read that attention is a finite resource, and that we should “pay attention to where we are paying attention”. So, maybe one of the reason we make mistakes is that we have emptied the well of “attention” and need to replenish before we proceed. But we don’t because . . . there is a deadline, we just want to finish three more inches, we need to finish this before we can get to that, etc. This makes a lot of sense to me, and I am going to try to “observe and subvert” to quote my sister. 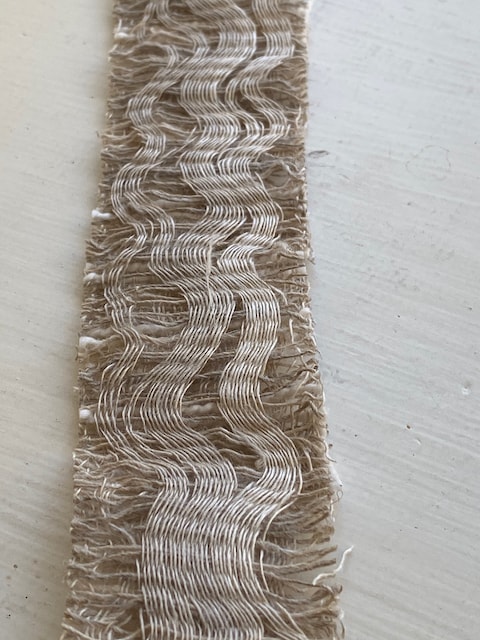 Then there are the mistakes that come from trying something new that doesn’t work. My mentor, Ute Bargmann told me how she had solved the problem of the “tutu” that happens when you try to weave a plain weave hem for a waffle weave fabric. If the threading is right, you can weave a double weave hem on a waffle threading, and by halving the density of the pw hem you subvert its tendency to flare. A recent attempt to deploy Ute’s technique (though I have successfully used the technique many times in the past) resulted in the wiggly specimen you see above. Maybe the sett was too loose, the singles too unruly . . . in any case, it didn’t work. It was a mistake, but one that was easily corrected (I just cut it off and hemmed in waffle), and one that left me with a kind of beautiful (to me) artifact of singles verve. Okay, not everyone may agree, but here is a possible positive – the unforeseen result that leads you to a new idea or new information.

I wrote a short article for Handwoven about a big mistake that occurred when I was working on my Master Weaver certification. I wanted to weave a kind of exploded houndstooth design in mohair for one of my final projects (this was almost 10 years ago and exploded houndstooth was exciting . . . then). I had just woven a big mohair blanket on the same loom, and in the interest of saving time, I wound the houndstooth warp (two subtle shades of warm grey-brown) and tied onto the previous warp. I started to weave and observed that my “Houndsteeth” (to me they look like flying plucked chickens) 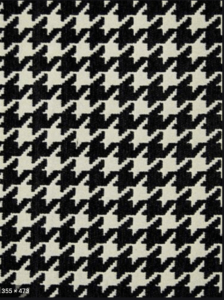 were very squished looking. I took a moment to think, and realized (oy!) that I was weaving a twill at a pw sett, and not getting a balanced weave at all. I didn’t want to resley because I would have ended up with a lap robe at best, I didn’t want to start over (submission time was rapidly approaching), and if I changed my plan to a simple plain weave, it would have not been the dazzler intended (a hairy plain weave throw in two shades of brown?). At that moment my husband scooted by my loom and said, “that looks good!” I said “what?” and he said, “that brown and turquoise”. I looked again and instead of seeing the “big fail” I had been looking at, I saw what he was referring to – the header I had woven in vivid turquoise waste yarn. It did look good. I was able to let go of the failed idea and re-envision the whole thing as a discontinuous weft design using chocolate brown and turquoise along with the grey-browns.  I guess you could categorize this as a mistake that lead to a more interesting design, or necessity as the mother of invention, or a sett lesson that I will never forget. Plus column? 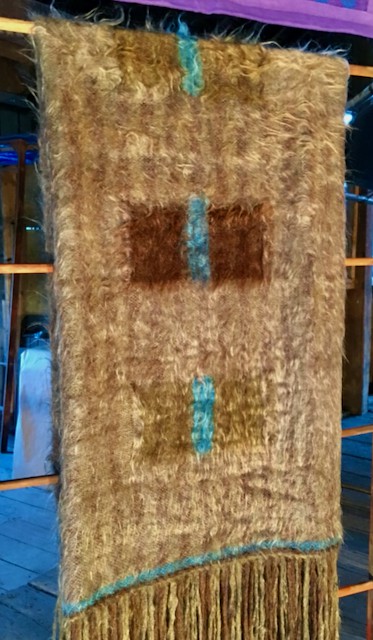 Below is a simple waning-attention mistake – only discovered after the towel was off the loom. Seeing and not seeing, research has shown that we often fill in the “picture” with assumptions rather than the more effortful act of really seeing. 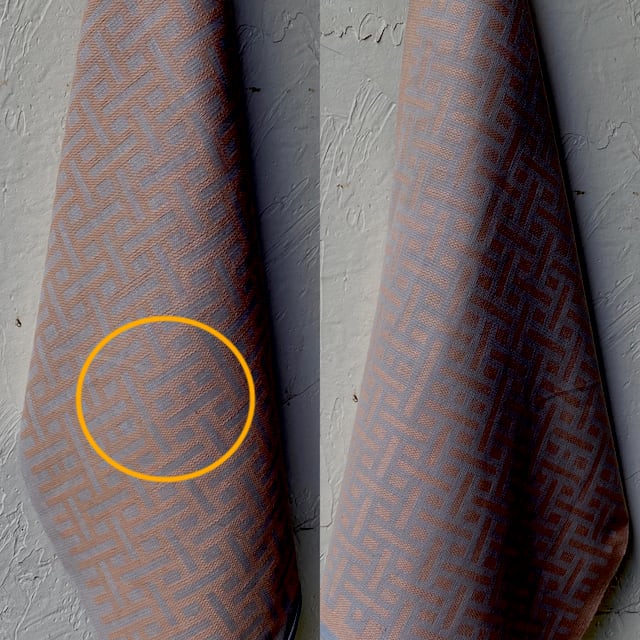 Another mistake below. I wove a Danish Medallion “variation” (not intended to be a variation) for a Yarn Lab sample. I thought, “that looks weird”, but pawned it off as not using a thicker yarn as outline, or some other vague, passing notion. Only after it was submitted did I wake up in the middle of the night thinking, “OFF SET!” Danish Medallion is supposed to be woven with the medallions offset from each other. I was horrified that when I had the “that looks weird” thought I didn’t take the initiative to walk 3 STEPS to my fab weaving library to look it up. No plus there. 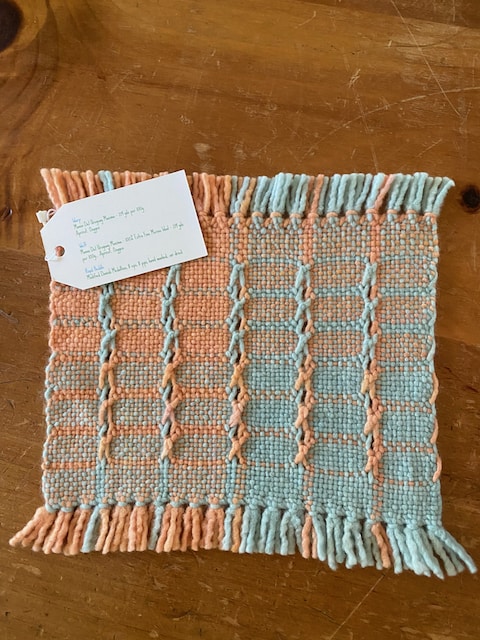 And then, sigh!, errors in color judgement. When “could look okay” just isn’t. 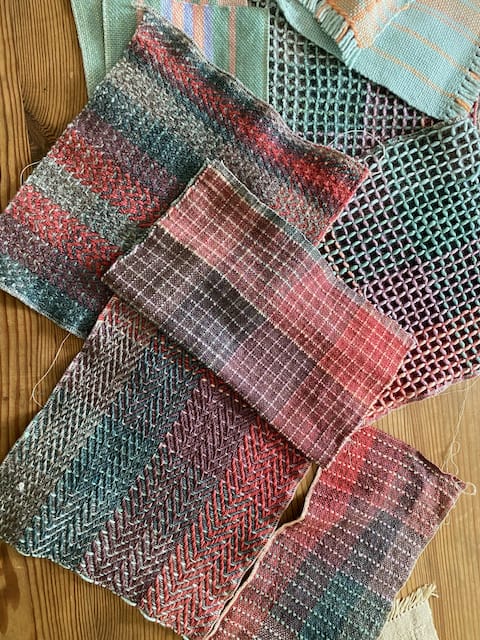 Or the 10 yards of border that I wove for a blanket edging without bringing the blanket (already woven) into the studio to see that the colors worked together . . . “I mean, how wrong can white with a white border be?”

“Very wrong!” says the woman who had to weave another 10 yards of border. 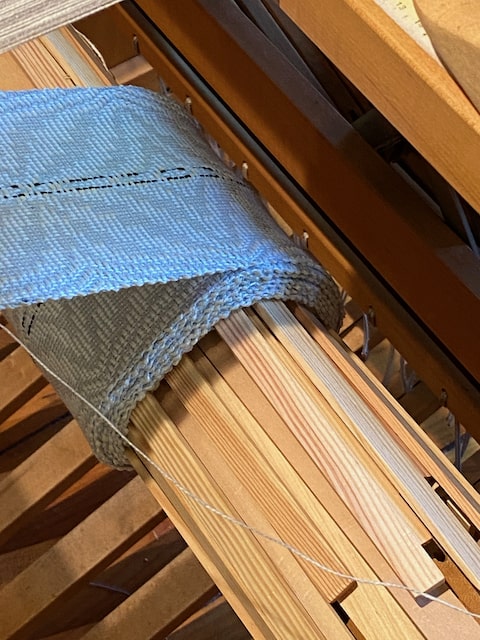 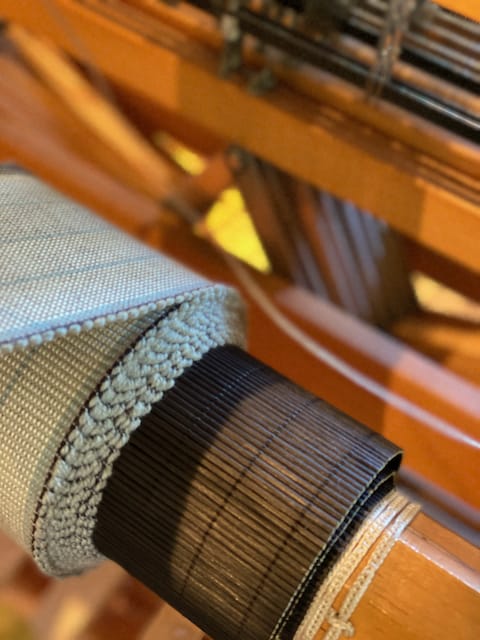 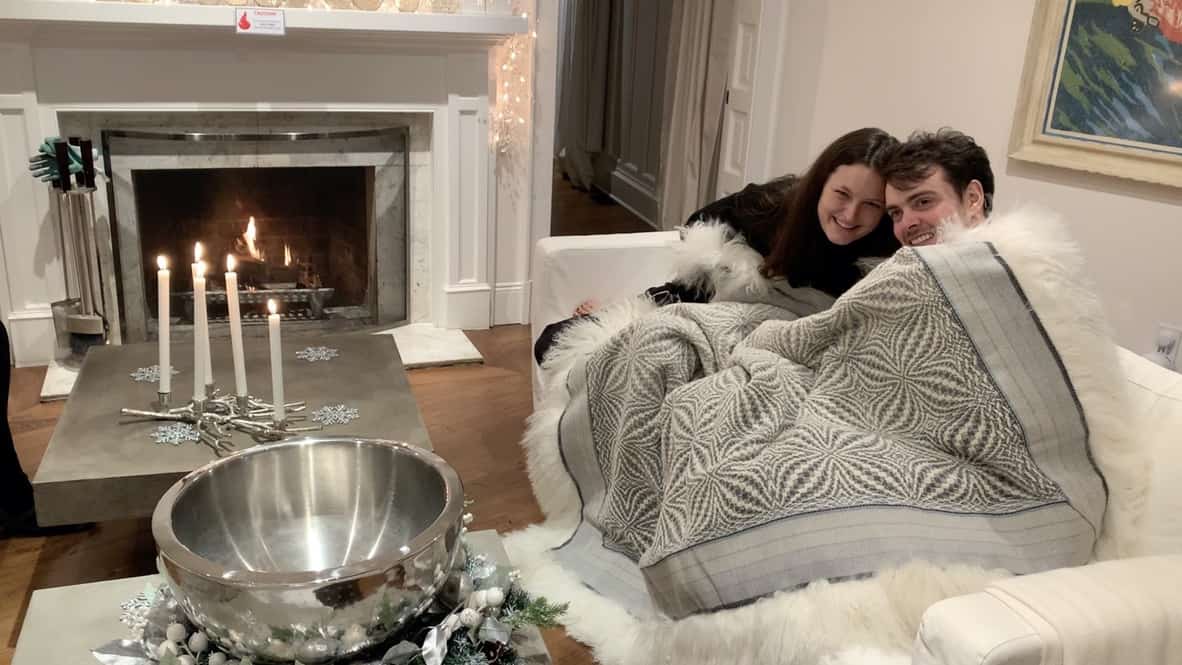 it turned out to be a success in the end . . . does anyone need 10 yards of dazzling white linen border?

Confession is good for the soul, but this isn’t just about confessing mistakes (that might end up being a novel-length post). I know there has been a lot written about how the fear of making mistakes can be paralyzing, and how making mistakes is how we learn and grow, and I truly agree with those sentiments. I would even say that in weaving we have a uniquely safe place to make mistakes. We aren’t designing the Mars Rover, or working in air traffic control. The worst that can happen is a wasted warp or a less than perfect piece of fabric. I am very, very okay with weaving mistakes, and often learn a lot from them. I will re-quote the wisdom of weaving guru Laurie Autio, “try not to think of what you are doing as weaving a thing, rather think of every piece you make as part of the process of making a weaver.”

But it is a very different thing to make errors in drafts or patterns that you use for class, sell or share with other weavers. And I want to talk about that. First off, I want to say that it is both very common to find errors in weaving books and patterns, and it is something that does have consequences. If you write a pattern with an error that costs a weaver money, or valuable, limited weaving time, or sends them astray as they are learning a new structure or interlacement, it is bad. I don’t want to do it, and I try very hard not to do it, but I still do it.  I also know that at Handwoven Magazine despite a half dozen acute sets of eyeballs inspecting each project (project author, multiple tech and copy editors, graphics staff and others) the errata pages are numerous, and there is hardly a weaving book I know that doesn’t have errors. I think it has something to do with the number of variables there are in each project.  If a small change is made in number of ends for example, that change may need to be reflected in dozens of places: yardage count, width in reed, motif repeat, treadling sequence, weaving steps, etc. It is hard to make sure there is continuity as you develop a project and tweak and adjust – think level of liquid in a drinking glass in a multi-million dollar movie that doesn’t match when the scene is reshot or edited. So there is an explanation, but that doesn’t help the weaver who is trying to make sense of a pattern as they try to squeeze a few hours of weaving into their day after work or on a weekend.

What to do? Errata pages help, but only if you can find them when you need them. Other weavers can help confirm that you are not crazy when something doesn’t make sense. And it is good to have a positive, but “savvy consumer” attitude. Read through patterns and try to understand the author’s point of view while using your own experience and knowledge to gauge if an approach, trick or technique seems sensible or suited your way of doing things, your equipment, etc. If something seems weird, contact the author and ask. For my part, I truly welcome questions. They help me understand where I may have been unclear. I really welcome corrections, and try to send out updated versions as soon as an error has been discovered. I obviously want the the best possible outcome for every project someone weaves using a pattern I created. I feel embarrassed and guilty when someone finds an error, but I also try to think of it as a process that will refine, clarify and hone.

I work hard (and so does my excellent tech editor Véronique Perrot) to find and correct errors, but I also work to accept and appreciate corrections. I think that those who find them learn something, and so do I. I don’t want this to sound like the burden of finding and working around errors is on the readers’ shoulders at all, but the errata pages for some of my most beloved/admired weaving books are numerous, so the idea that I can “solve” the problem of errors is unlikely. I will (with the help of Véronique and readers) continue to try with this joke in mind –  Question: “What did you make today? Answer: Mistakes.