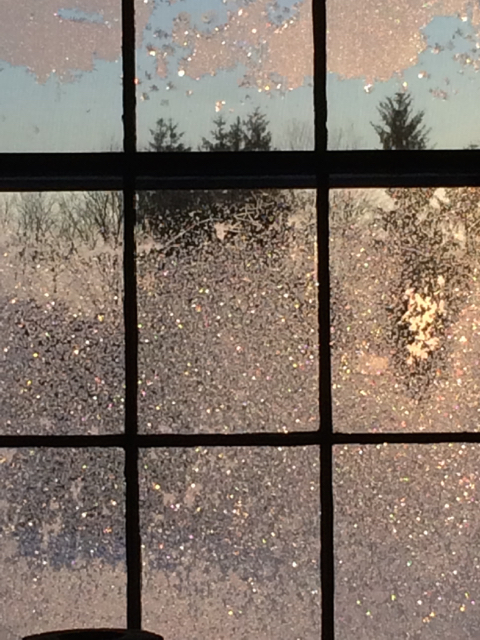 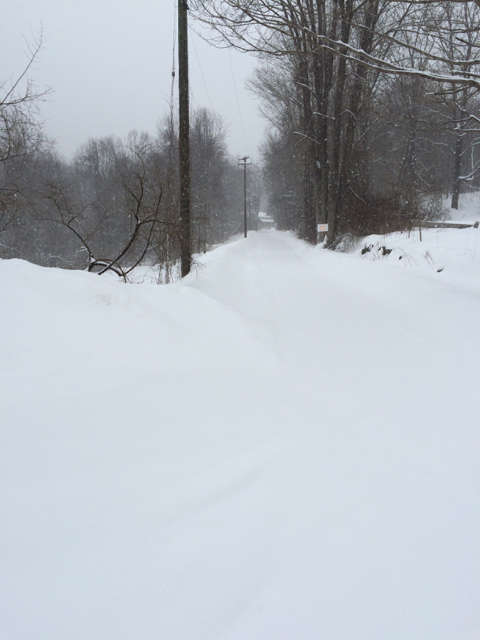 I realize that better pictures of extreme cold are being posted all over the web, but I need to document my own seemingly never ending polar vortex.  My mother who lives in San Antonio asked how we were faring and I told her that my commute has been hellish – notice the treacherous path from my house to my barn studio:) 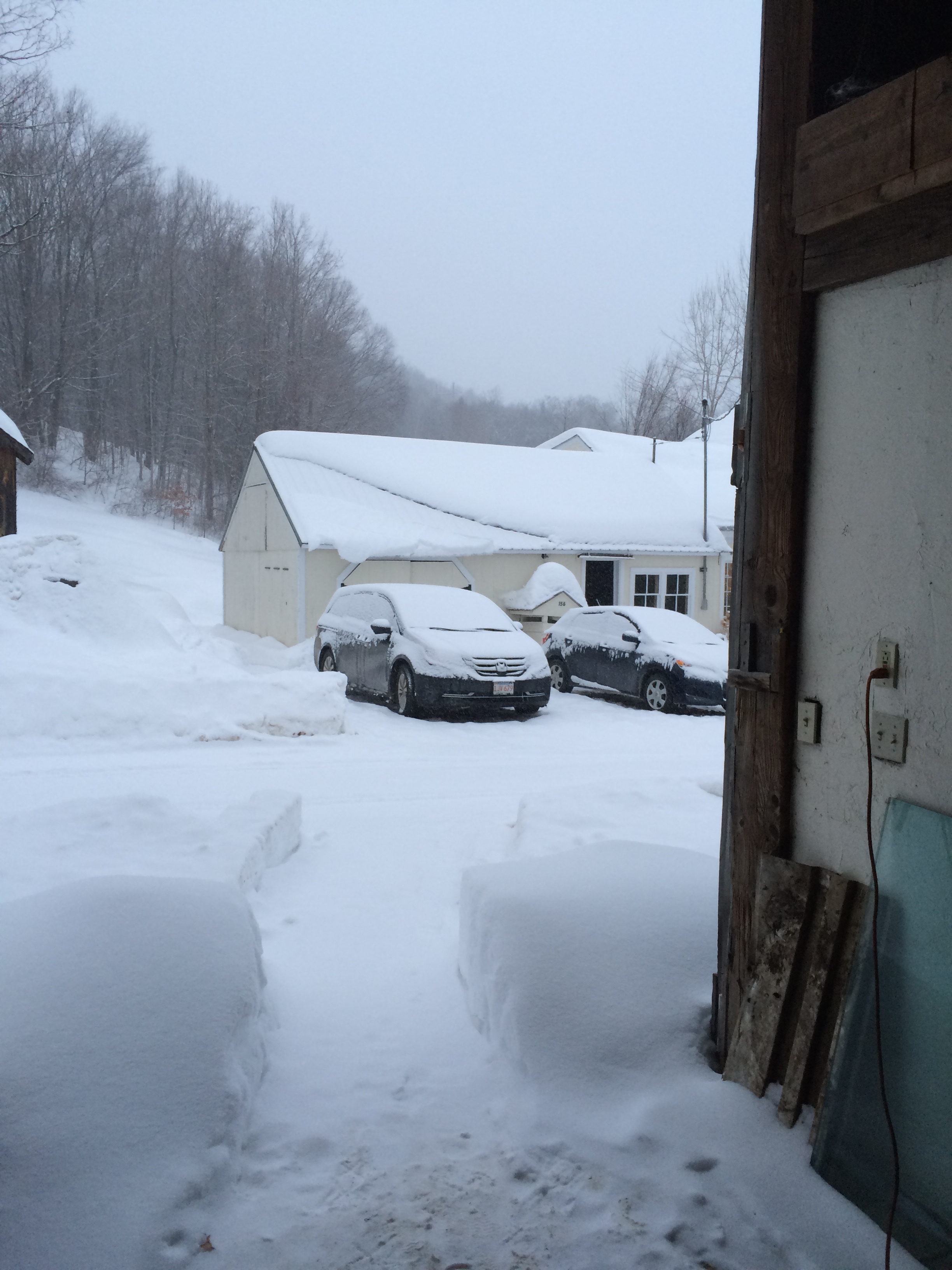 The little branches poking out of the snow are actually buried trees that we lost in an earlier ice storm. 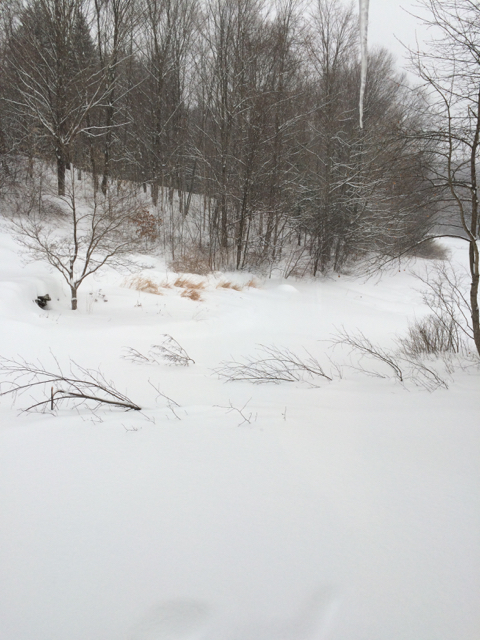 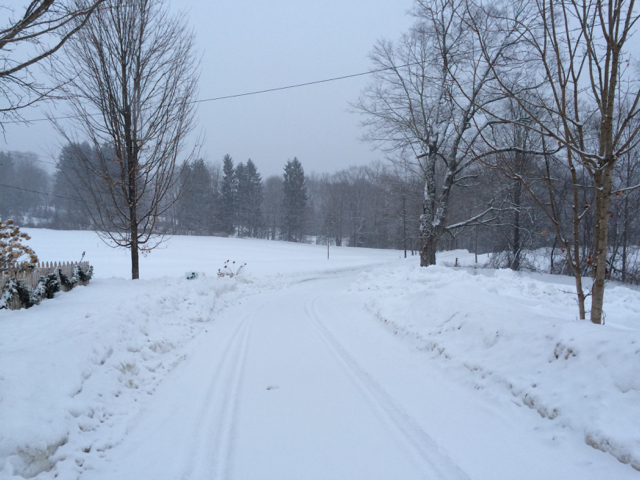 I did appreciate Valerie’s comment that this kind of cold makes weavers appreciate our blanket making skills more fully – the blanket becomes less a decorative element and more a survival tool!

So all this ice brought to mind a great story that my friend Suzanne Pelto told me during a lovely lunch we had in the bright July sunshine last summer.  As I look out my window this morning, I think this is a more appropriate time for this ice-y story.

Suzanne told me that her father was born to a large family in Quebec, was a super bright, hardworking, competent man who was forced to leave school early to help support the family when his father died.  He found work in the ship yards of Providence during WWII when they were building ships at breakneck speeds.  Because of his lack of education, he was a simple laborer with not much input in how the engineers and managers did things.  But one day there were a group of engineers and foremen standing around trying to solve a snag in their process.  Apparently they would build the ships and giant engines separately, then lift the engines with huge ropes and gently lower them into the ship’s engine room.  They hit a snag at the point where the engines hit the ship bottom with the ropes trapped under them.  The group was talking and drawing and arguing when Suzanne’s dad (who had spent his boyhood harvesting ice in Quebec) stepped forward and suggested big ice blocks to hold the engines up so that the ropes could be removed and the engines could slowly lower as the ice melted.  The foreman told him to go back to work and stop interrupting, but one of the engineers said, “Wait, tell me your idea.” and so because of his familiarity with and knowledge of a material he was able to come up with a unique solution.  And who knows what larger impact he had on the war effort as a whole.  I love this story for the obvious “underdog triumphs” element, but also because it illustrates how important it is to familiarize oneself with an array of techniques and materials. Not simply for variety, but because if you have never used a material/technique/tool it won’t be in your metaphorical toolbox.  You might not be able to reach the best solution to a problem if all you know is a “hammer”. 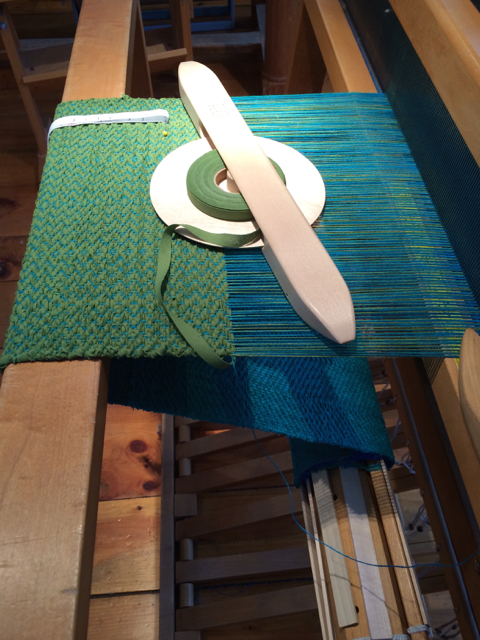 So, in my attempt to add to my metaphorical toolbox (and because it was on serious discount) I bought a bunch of Poppana from WEBS for a series of placemats for my mom. Poppana is a Finnish product – essentially narrow, pre-cut, bias cotton rags. I have been using it with both a poppana shuttle and a stick shuttle.  Because I am weaving on my Schact standard, the poppana shuttle is a little wide.  It would work better on a Scandinavian loom with a deeper space between the heddles and the front beam. I find that the stick shuttle works equally well. This a dish that I am using to select colors: 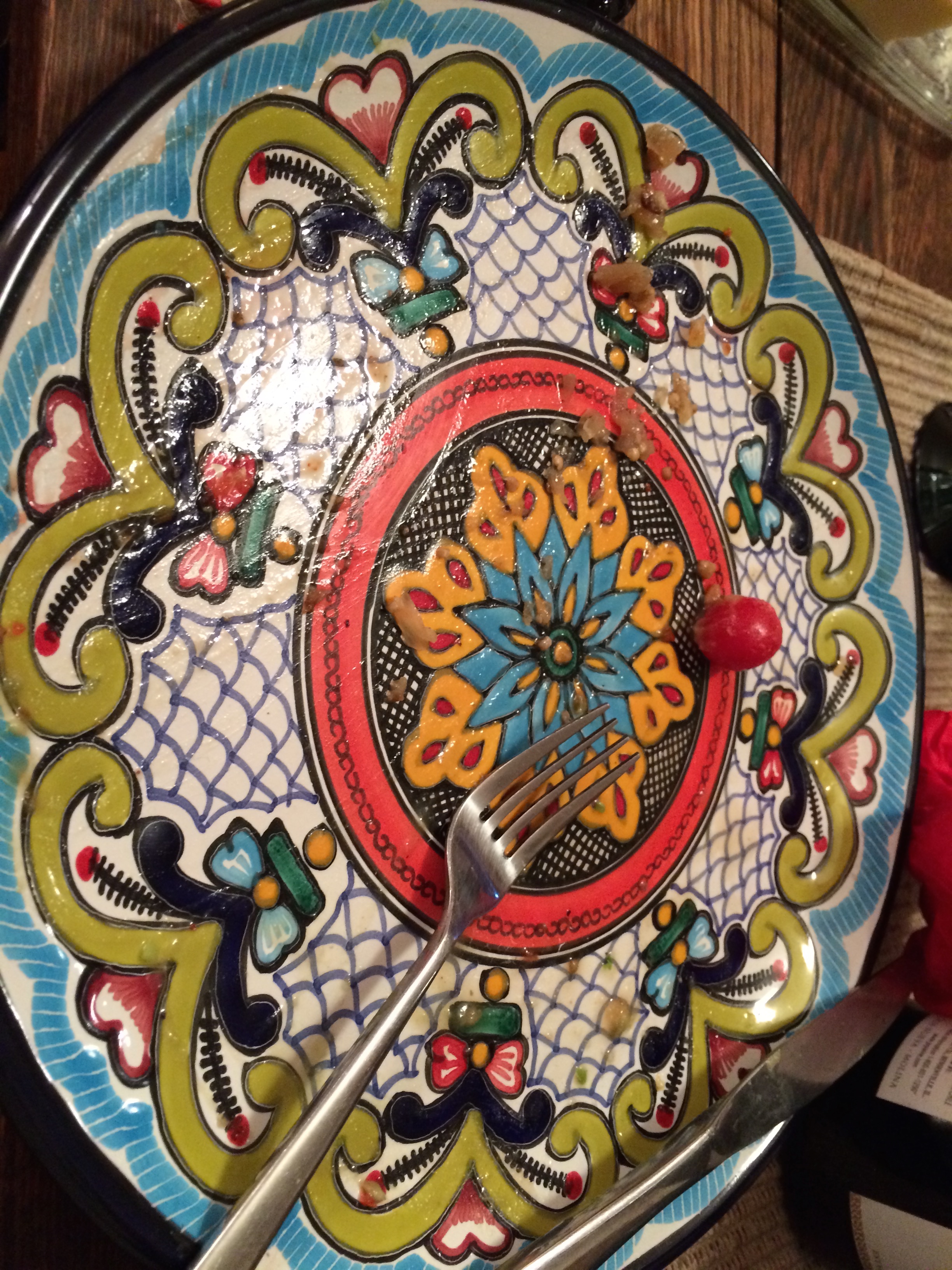 Here are some of the poppana colors that I am going to use. One of the great things about this material is the huge range of colors.  I have been using between two and three rolls per placemat on a 22/2 cottolin warp. I wound a warp for half the placemats using blue and green, and I plan to tie on an orange/red warp to use with the warm colors for for the final 4 placemats. 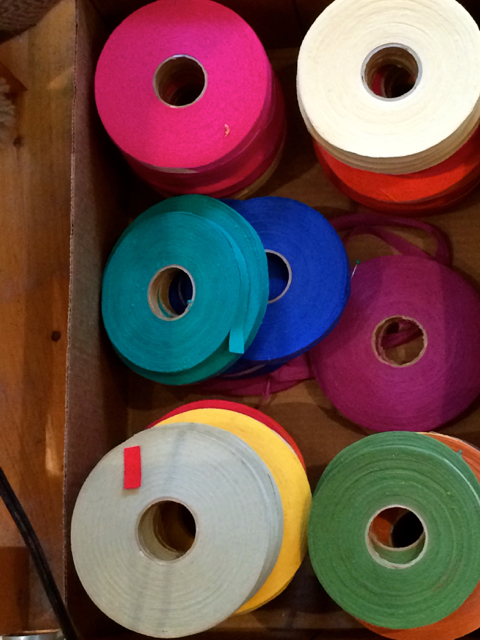 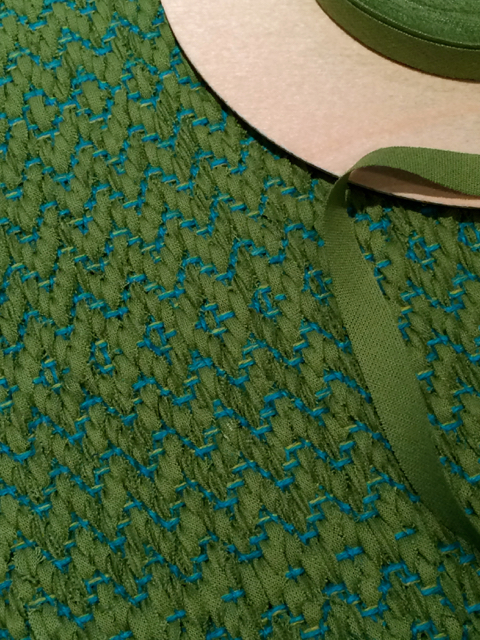 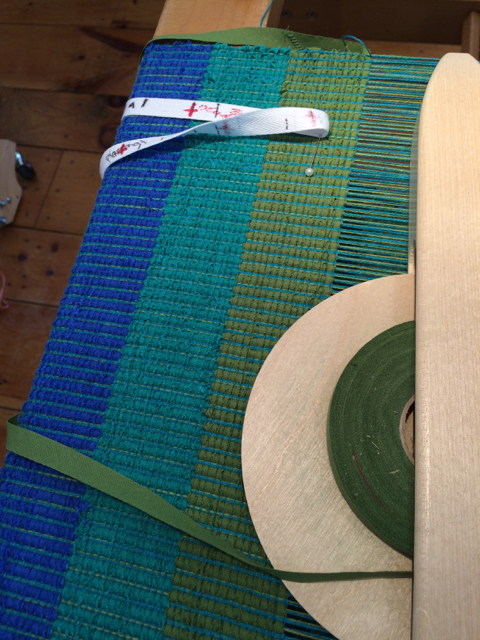 Treadled in a pw sequence alternating poppana and cottolin.

Lots of projects in the works at the moment. I am working on a runner to donate for the SEFF auction and a blanket/yardage for the faculty show at SEFF or maybe for coat fabric for an article in HW or both. 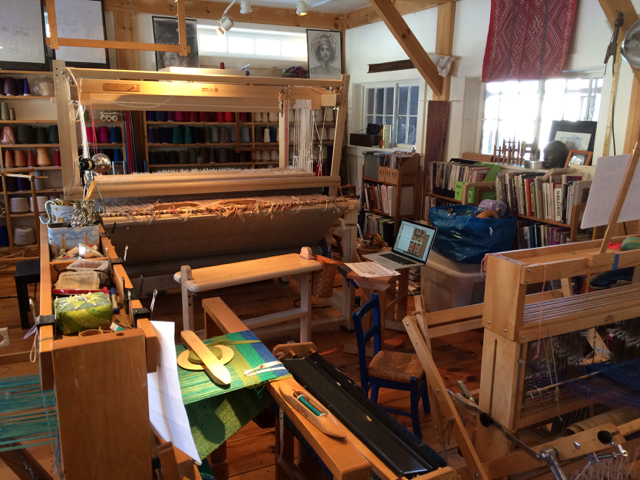 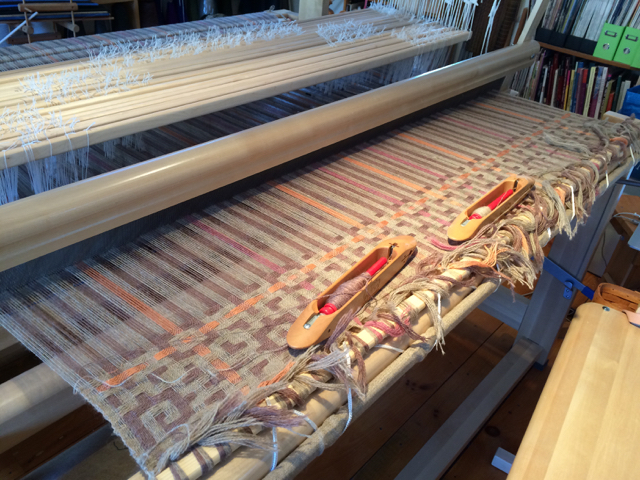 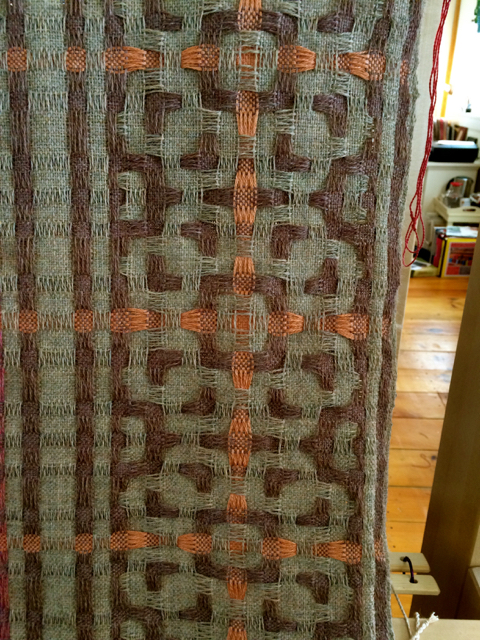 I still have half the warp to weave, but I cut off at the 1/2 point to wash and plan. 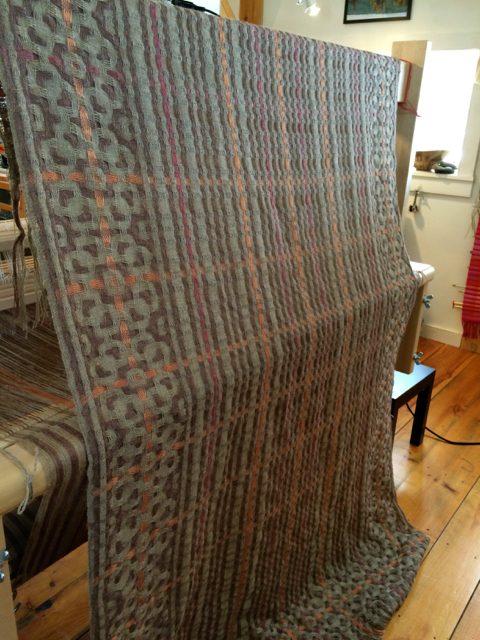 The washed version.  I was a little bummed to have over 20% shrinkage widthwise. I usually get about 15%, but the stripes draw in much more than the flower motifs. p 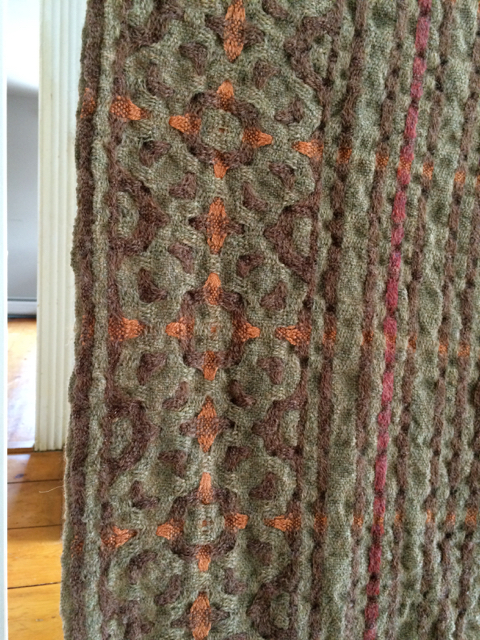