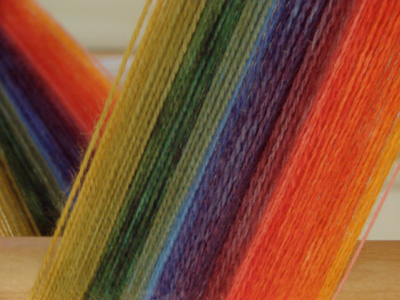 Well, I tried, but I couldn’t do it. I liked Tumblr in some ways, but the milieu was a little youthful, the formatting a little arduous and even though it broke my heart with its MAJOR fail, I really like how iWeb works. I am going to try again, and if it loses all my posts again after another couple of years . . . so be it.

I also miss my small but encouraging and interesting group of readers. I hope the epic fail hasn’t made you give up on me for good.

I was hoping for a super exciting bunch of finished projects for my “return to iWeb” post, but I have been doing the documentation for the first wave of projects that I will submit for my Master Weavers next week. Many wise weavers told me to do the paperwork for each project as it was completed. I had a notebook . . . I had many post-its, scraps of paper, bunches of yarn – I thought I was pretty much there . . . well . . . today was day two of assembling all those post-its, scraps of paper, index cards with “30 to 27” what? written cryptically in pencil. I guess I should re-name my blog “Lessons to (hopefully) Learn Before I Die.” Sure, it lacks the flow of the Robert Frost knock-off, but maybe I need a more direct message.

Every loom is dressed, so I hope to post some actual weaving soon. Send me a line if you have the time to let me know that I haven’t lost you . . .